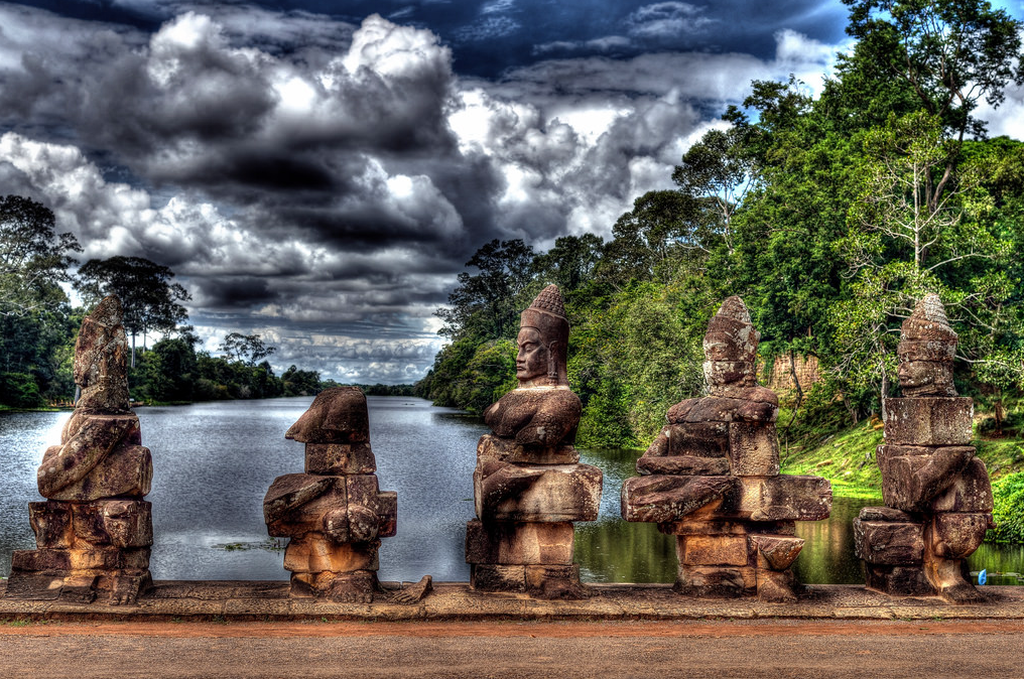 From Wikipedia, the free encyclopedia

Angkor Thom (“Great City”), located in present day Cambodia, was the last and most enduring capital city of the Khmer empire. It was established in the late twelfth century by King Jayavarman VII. It covers an area of 9 km², within which are located several monuments from earlier eras as well as those established by Jayavarman and his successors. At the centre of the city is Jayavarman’s state temple, the Bayon, with the other major sites clustered around the Victory Square immediately to the north.

Angkor Thom was established as the capital of Jayavarman VII’s empire, and was the centre of his massive building programme. One inscription found in the city refers to Jayavarman as the groom and the city as his bride.

Angkor Thom seems not to be the first Khmer capital on the site, however. Yasodharapura, dating from three centuries earlier, was centred slightly further northwest, and Angkor Thom overlapped parts of it. The most notable earlier temples within the city are the former state temple of Baphuon, and Phimeanakas, which was incorporated into the Royal Palace. The Khmers did not draw any clear distinctions between Angkor Thom and Yashodharapura: even in the fourteenth century an inscription used the earlier name.[1]:138 The name of Angkor Thom—great city—was in use from the 16th century.

The last temple known to have been constructed in Angkor Thom was Mangalartha, which was dedicated in 1295. Thereafter the existing structures continued to be modified from time to time, but any new creations were in perishable materials and have not survived. In the following centuries Angkor Thom remained the capital of a kingdom in decline until it was abandoned some time prior to 1609, when an early western visitor wrote of an uninhabited city, “as fantastic as the Atlantis of Plato“. It is believed to have sustained a population of 80,000–150,000 people.