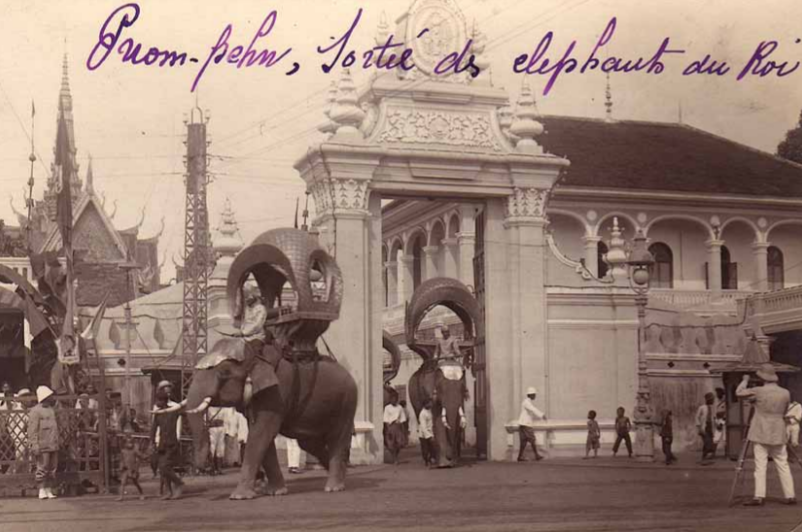 A brief voyage through Cambodia’s turbulent but fascinating history

Legend has it that the land now called Cambodia was the result of a marriage between an IndianBrahmin and the daughter of a dragon king. As a dowry, the dragon king drank the waters inundating his aquatic kingdom, then bequeathed the land to his new son-in-law.
The oldest archaeological artifacts in Cambodia are stone tools dating from 6,000 to 7,000BCE and, by the beginning of the Christian era, it is believed that Cambodians spoke a language resembling modern Khmer. The first cohesive Cambodian states arose around this time in the Mekong Delta. The largest of these kingdoms, which traded extensively with India and China, was called Funan
by the Chinese.

As Funan waned in the 6th Century, a kingdom named Chenla emerged. Its sprawling 7th-Century capital, Sambor Prei Kuk, can still be seen in present-day Kampong Thom province. Like Funan, Chenla largely borrowed its religious and cultural life from the Indian subcontinent. Both Chenla and Funan were dominant forces in a land dotted with rival kingdoms and principalities. In the late 8th Century, an ambitious ruler named Jayavarman II began uniting these disparate settlements through alliances and conquests. In 802, Jayavarman II declared himself monarch of a newly unified Cambodia, thus birthing the Khmer Empire – one that would go on to dominate mainland Southeast Asia for the next 600 years.

Towards the end of the 9th Century, Angkor became the seat of the Khmer Empire. Built by a succession of kings, the city’s jewel, Angkor Wat, was constructed in the early 12th Century.
Under the reign of Jayavarman VII (1125 to 1218), Buddhism replaced Hinduism as the empire’s state religion. The monarch is also credited with constructing the walled city of Angkor Thom and the majestic Bayon temple. Drought, population pressures and the failure of Angkor’s complex hydrological system coincided with the rise of the Ayutthaya Kingdom in present-day Thailand. A series of conflicts with this ascendant power in the 14th and 15th centuries hastened Angkor’s demise, and by 1431, the city had been sacked and largely abandoned. The next four centuries are commonly referred to as Cambodia’s ‘Dark Ages’. Besieged by Thailand to the west and Vietnam to the east, the country was in danger of disappearing from the map until King Norodom I was coerced into establishing a French protectorate in 1863. The capital was moved from Oudong to Phnom Penh, and French colonialists began arriving to exploit the country’s resources.

In 1941, the country’s French overlords placed 19-year- old Prince Norodom Sihanouk on Cambodia’s throne. After much passionate lobbying, King Sihanouk secured Cambodia’s independence in 1953, ushering in a ‘golden age’ of peace, prosperity and cultural development that would end with the outbreak of the Vietnam War. A coup d’état in 1970 saw Sihanouk – who had dominated his country’s political affairs – deposed. For the next five years, the government of pro-American General Lon Nol vainly fought off a mounting communist insurgency. On April 17, 1975 the communists captured the capital, beginning the brutal rule of Pol Pot and his Khmer Rouge. Under Pol Pot, urbanites, artists, intellectuals and ethnic minorities were systematically eliminated as the communists sought to transform Cambodia into a Maoist agrarian utopia. An estimated 1.7 million people (about 20% of the population) died in this period – half from starvation and disease, the other half from execution.
The Khmer Rouge’s reign of terror was brought to an end by a Vietnamese invasion in 1979. The Khmer Rouge took refuge in the west and the north of the country, sparking a civil war that would last for two decades.  Along with the Vietnamese came a clutch of former Khmer Rouge fighters who had fled their party’s internal purges. Among them was a chain-smoking ex-guerrilla named Hun Sen who had lost his left eye during the 1975 capture of Phnom Penh. Initially installed as foreign minister, Hun Sen became his country’s prime minister in 1985 at the age of 33. The Vietnamese withdrew in 1989, leaving Hun Sen and his ex-Khmer Rouge comrades in power. In 1992, the United Nations arrived in the country to implement a peace deal between Cambodia’s warring factions. A 1993 UN-organised election saw Sihanouk’s son, Prince Norodom Ranariddh, win the poll, but with Hun Sen and his Cambodian People’s Party (CPP) refusing to cede power, a co-prime ministership was established. In
a 1997 coup, Ranariddh was ousted from power. Meanwhile, in 1999, after decades of fierce fighting, the CPP- controlled army finally managed to dismantle the Khmer Rouge. Elections in 2003 and 2008 saw the CPP win easy victories as Cambodia’s royal family disappeared as a relevant political force.
The past decade has brought much- needed stability to this small Southeast Asian kingdom. Cambodia now boasts an impressive GDP growth rate of about 7%, fuelled primarily by its growing garment and tourism industries. Surviving Khmer Rouge leaders, moreover, are finally being brought to trial, and with an influx of foreign investments, many Cambodians are enjoying rapid improvements to their quality of life. However, in the country’s 2013 election, CPP hegemony was challenged for the first time in 15 years. Riding a wave of youth support, Sam Rainsy’s Cambodia National Rescue Party (CNRP) surprised the pundits by making huge gains in the country’s 123- seat parliament. Earlier in the year, 61-year-old Hun Sen publicly stated that he would rule until the age of 74 but the election result threw that into doubt. For almost a year, the CNRP – contesting the results – refused to take up their seats in the National Assembly and it was not until July 2014 that a deal was struck between the two main parties and the CNRP took up their seats. With some forecasting a move towards true representative democracy, and with a youthful, tech-savvy population becoming more and more engaged, the next few years could be a turning point in Cambodia’s trajectory.

US withdrawal from Afghanistan – Leonid Ivashov