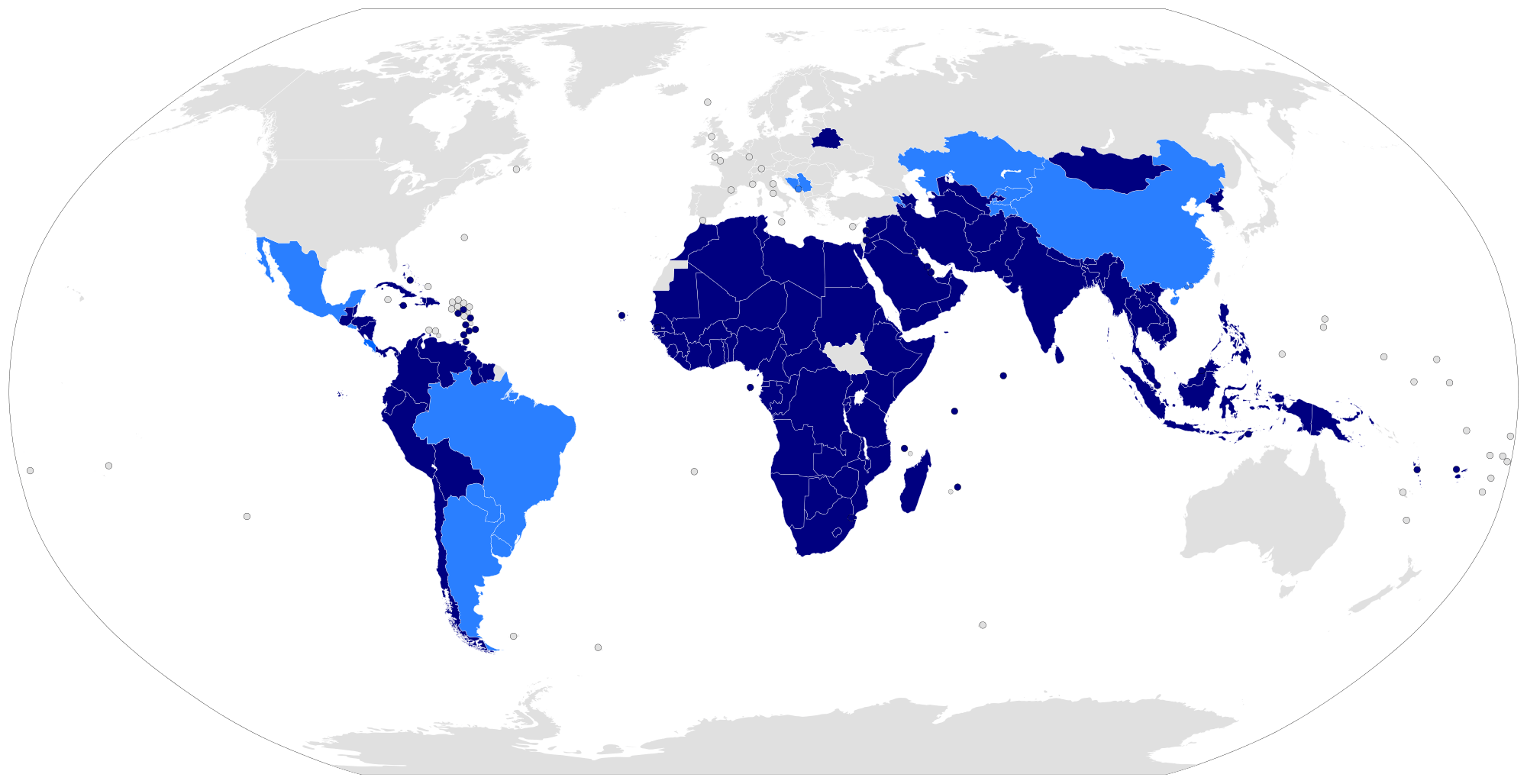 From Wikipedia, the free encyclopedia

The Non-Aligned Movement (NAM) is a group of states which are not formally aligned with or against any major power bloc. As of 2012, the movement has 120 members.

The organization was founded in Belgrade in 1961, and was largely conceived by India’s first prime minister, Jawaharlal Nehru; Indonesia’s first president, Sukarno; Egypt’s second president, Gamal Abdel Nasser; Ghana’s first president Kwame Nkrumah; and Yugoslavia’s president, Josip Broz Tito. All five leaders were prominent advocates of a middle course for states in the Developing World between the Western and Eastern Blocs in the Cold War. The phrase itself was first used to represent the doctrine by Indian diplomat V. K. Krishna Menon in 1953, at the United Nations.

In a speech given during the Havana Declaration of 1979, Fidel Castro said the purpose of the organization is to ensure “the national independence, sovereignty, territorial integrity and security of non-aligned countries” in their “struggle against imperialism, colonialism, neo-colonialism, racism, and all forms of foreign aggression, occupation, domination, interference or hegemony as well as against great power and bloc politics”. The countries of the Non-Aligned Movement represent nearly two-thirds of the United Nations’s members and contain 55% of the world population. Membership is particularly concentrated in countries considered to be developing or part of the Third World.

The 16th NAM summit took place in Tehran, Iran, from 26 to 31 August 2012. According to MehrNews agency, representatives from over 150 countries were scheduled to attend. Attendance at the highest level includes 27 presidents, 2 kings and emirs, 7 prime ministers, 9 vice presidents, 2 parliament spokesmen and 5 special envoys. At the summit, Iran took over from Egypt as Chair of the Non-Aligned Movement for the period 2012 to 2015. The 17th Summit of the Non Aligned Movement is to be held in Venezuela in 2016.

The Non-Aligned movement was never established as a formal organization, but became the name to refer to the participants of the Conference of Heads of State or Government of Non-Aligned Countries first held in 1961. The term “non-alignment” was established in 1953 at the United Nations. Nehru used the phrase in a 1954 speech in Colombo, Sri Lanka. In this speech, Nehru described the five pillars to be used as a guide for Sino-Indian relations called Panchsheel (five restraints), these principles would later serve as the basis of the Non-Aligned Movement. The five principles were:

A significant milestone in the development of the Non-Aligned Movement was the 1955 Bandung Conference, a conference of Asian and African states hosted by Indonesian president Sukarno, who gave a significant contribution to promote this movement. Bringing together Sukarno, U Nu, Nasser, Nehru, Tito, Nkrumah and Menon with the likes of Ho Chi Minh, Zhou Enlai, and Norodom Sihanouk, as well as U Thant and a young Indira Gandhi, the conference adopted a “declaration on promotion of world peace and cooperation”, which included Nehru’s five principles, and a collective pledge to remain neutral in the Cold War. Six years after Bandung, an initiative of Yugoslav president Josip Broz Tito led to the first Conference of Heads of State or Government of Non-Aligned Countries, which was held in September 1961 in Belgrade. The term non-aligned movement appears first in the fifth conference in 1976, where participating countries are denoted as members of the movement.

At the Lusaka Conference in September 1970, the member nations added as aims of the movement the peaceful resolution of disputes and the abstention from the big power military alliances and pacts. Another added aim was opposition to stationing of military bases in foreign countries.

The founding fathers of the Non-Aligned Movement were: Jawaharlal Nehru of India, Sukarno of Indonesia, Josip Broz Tito of Yugoslavia, Gamal Abdul Nasser of Egypt and Kwame Nkrumah of Ghana. Their actions were known as ‘The Initiative of Five’.

The movement stems from a desire not to be aligned within a geopolitical/military structure and therefore itself does not have a very strict organizational structure. Some organizational basics were defined at the 1996 Cartagena Document on Methodology. The Summit Conference of Heads of State or Government of Non-Aligned States is “the highest decision making authority”. The chairmanship rotates between countries and changes at every summit of heads of state or government to the country organizing the summit.

Requirements for membership of the Non-Aligned Movement coincide with the key beliefs of the United Nations. The current requirements are that the candidate country has displayed practices in accordance with the ten “Bandung principles” of 1955:

Role after the Cold War

Since the end of the Cold War and the formal end of colonialism, the Non-Aligned Movement has been forced to redefine itself and reinvent its purpose in the current world system. A major question has been whether many of its foundational ideologies, principally national independence, territorial integrity, and the struggle against colonialism and imperialism, can be applied to contemporary issues. The movement has emphasised its principles of multilateralism, equality, and mutual non-aggression in attempting to become a stronger voice for the global South, and an instrument that can be utilised to promote the needs of member nations at the international level and strengthen their political leverage when negotiating with developed nations. In its efforts to advance Southern interests, the movement has stressed the importance of cooperation and unity amongst member states, but as in the past, cohesion remains a problem since the size of the organisation and the divergence of agendas and allegiances present the ongoing potential for fragmentation. While agreement on basic principles has been smooth, taking definitive action vis-à-vis particular international issues has been rare, with the movement preferring to assert its criticism or support rather than pass hard-line resolutions.

The movement continues to see a role for itself, as in its view, the world’s poorest nations remain exploited and marginalised, no longer by opposing superpowers, but rather in a uni-polar world, and it is Western hegemony and neo-colonialism that the movement has really re-aligned itself against. It opposes foreign occupation, interference in internal affairs and aggressive unilateral measures, but it has also shifted to focus on the socio-economic challenges facing member states, especially the inequalities manifested by globalization and the implications of neo-liberal policies. The Non-Aligned Movement has identified economic underdevelopment, poverty, and social injustices as growing threats to peace and security.

Vladimir Putin said Russia is all for creating a non-aligned system of international security to counter global terror. The president, speaking at the V-Day parade in Moscow, called on all nations to learn the lessons of WWII.

“Today our civilization has faced brutality and violence – terrorism has become a global threat,” the Russian president said, addressing the crowds on Moscow’s Red Square ahead of a parade dedicated to the 71st anniversary of victory in WWII. “We must defeat this evil, and Russia is open to join forces with all countries and is ready to work on the creation of a modern, non-aligned system of international security.”

Question for EU – Is it time to leave NATO?

From Golden Dollar to Petro Dollar to Narco Dollar

Watch out! Biden wants to save the planet