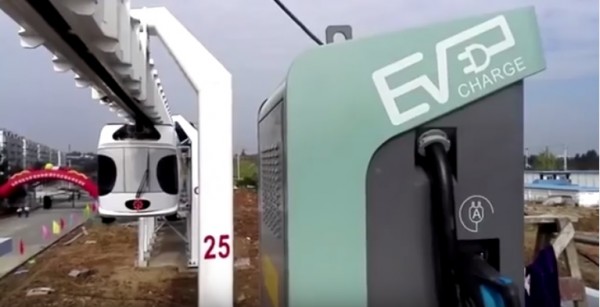 The world’s first battery-powered ‘rollercoaster’ trains which hang from the track suspended in mid-air have been unveiled in China.

The incredible hanging carriages were filmed in action in Chengdu, reaching speeds of up to 60 km/h on the upside down monorail.

The fascinating trains, powered by lithium batteries, will be able to carry 120 passengers in each carriage.

But no official opening date has been announced for the suspended railway, with tests expected to continue following Friday’s successful run.

Wangming added: ‘The test runs will continue for tens of thousands of kilometers to check performance capabilities before official operation.’

Chengdu, which also operates an underground Metro system, is the first city in China to officially unveil a suspension railway but the cosmopolitan city of Shanghai will also be opening one next year.