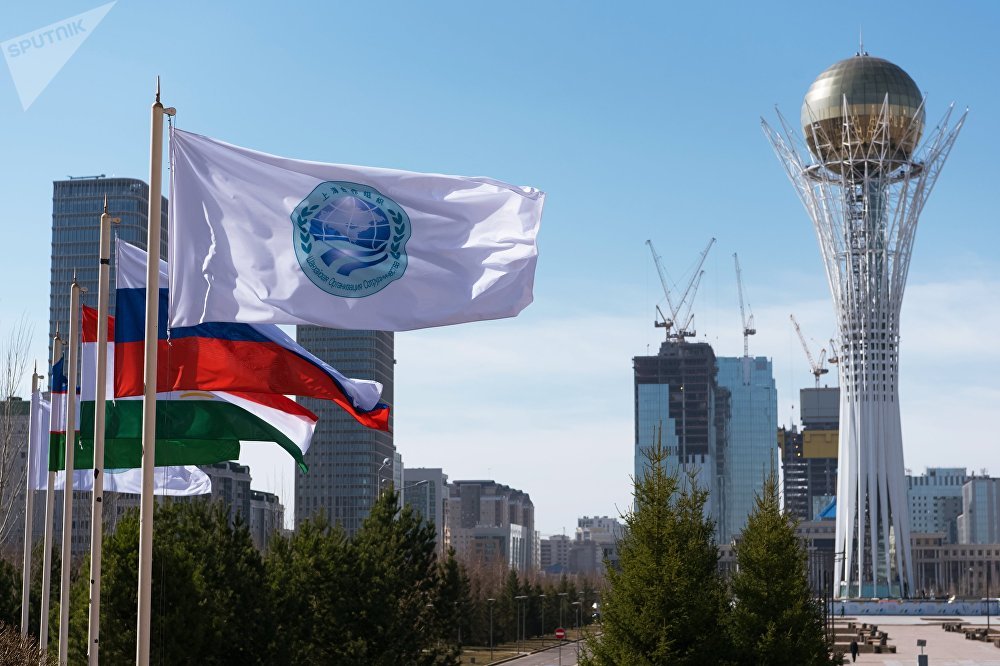 The Shanghai Cooperation Organisation’s role in global affairs continues to increase: the bloc has now focused on counterterrorism issues in the Eurasian “heartland” and the US and EU have to take this into account

The West now has no other choice but to take the Shanghai Cooperation Organization (SCO) into account, Alexander Dugin, political scientist and the leader of the International Eurasian Movement, told Radio Sputnik, adding that the SCO is by no means an equivalent of NATO.

On May 9 leaders of SCO member states signed a decree admitting India and Pakistan to the bloc.

“Today, new full members join the Shanghai Cooperation Organization…. The expansion of the SCO will undoubtedly contribute to ensuring that it will become more powerful and influential in the political, economic and humanitarian spheres,” Russian President Vladimir Putin said at the SCO meeting in Astana on Thursday.

According to Dugin, the expansion of the SCO is yet another step toward the new multipolar world order.

“By bringing together the largest Asian powers, where huge economic potential is concentrated and considerable strategic forces, [the SCO] made a very serious step towards the institutionalisation of a multipolar world,” Dugin stressed.

The political scientist underscored, however, that the SCO is not an Asian version of NATO.

“The SCO was created not as an ‘Asian NATO,’ but as a Eurasian structure, which, in fact, opposes globalization,” he told Radio Sputnik. “NATO is dominated by one state, one ideology, while the SCO has brought together states and forces which belong to completely different civilizations with different ideologies and political systems. That shows that the SCO is a multipolar bloc.”

The SCO members also inked a convention on countering extremism and adopted a statement by the bloc leaders who pledged commitment to the joint fight against international terrorism.

According to Dugin, the West will have to take the SCO’s position into consideration, including its collective stance on counterterrorism.

“If the SCO works a consolidated position on countering terrorism — including Pakistan, which itself suffers from terrorism — then this will mean completely different conditions for the solution of the Syrian crisis. If the SCO says ‘no’ to some actions of the West, then this will have to be taken into account [by the US and EU],” Dugin said.

For his part, political scientist Rostislav Ischenko, president of the Ukraine-based Center for Systemic Analysis, called attention to the US and EU’s inability to cope with the terrorism threat in the Middle East and Central Asia.

“The helplessness of Europe has already affected the interests of the SCO member states. It is no coincidence that the current summit was almost entirely devoted to Central Asia’s security issue, given… the plans of radical Islamists to transfer their actions to this region,” Ischenko wrote in his op-ed for RIA Novosti.

“Neither Russia nor China could allow the gangs of terrorists being expelled from the Middle East to rampage on their borders and at the very center of their joint integration project,” the scholar stressed.

According to Ischenko, it is obvious that the upsurge in the terrorist activity in the Middle East and North Africa was prompted by irresponsible and myopic policies of Washington and its European allies.

“As a result of this policy, the EU has completely lost its influence in the Middle East,” the scholar pointed out. “Furthermore, Europe has found itself unable to protect its territory and its way of life from terrorist attacks and the rising tide of refugees.”

“The US is fighting for the opportunity to maintain its former influence in the Middle Eastern region at least to some extent. Those who make efforts to introduce proper order in the region are Russia (a founding member of the SCO), Iran (an SCO observer), Syria and Egypt (applied for observer status in the SCO), as well as Turkey (an SCO dialogue partner),” Ischenko wrote.

According to the scholar, Russia, its former Soviet allies and Asian states have become the driving force behind the Eurasian integration. For its part, the EU has yet to join the process.

In any event, one can’t deny that the role of the SCO is global affairs is growing at a steady pace.

Speaking to Sputnik China, Jia Lieying, an expert at the School of International Relations at Beijing Language and Culture University emphasized the importance of the ongoing integration process.

“The incorporation of India and Pakistan is the brightest moment of the recent summit,” Jia highlighted. “In the very beginning, the Shanghai Cooperation Organization included five states, in 2001 there were six. For 16 years the organization had not expanded. However, all these years India and Pakistan had been seeking to join the SCO.”

“Their accession will provide more opportunities for cooperation within the SCO framework, and it is especially worth noting that the expansion will facilitate the improvement of Indo-Pakistani and Sino-Indian relations. These states will be able to resolve the existing contradictions on the new platform. This will become a positive example for other regional organizations,” Jia stressed.

China will not fall into the ‘Thucydides Trap’ with India