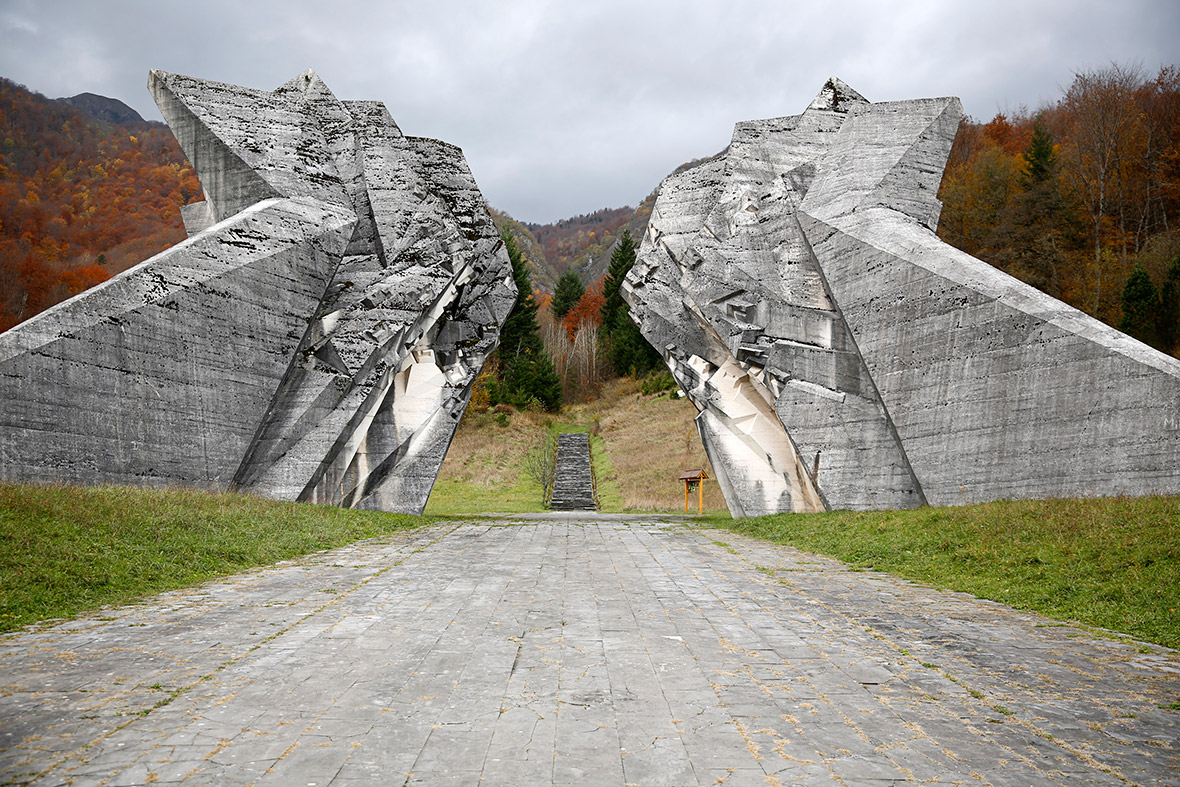 There’s a message and a hashtag on Twitter these days that should become the biggest meme ever. If only Yugoslavia and our world could be put back together again with a damages trial against NATO, that would be poetic justice. Unfortunately, I doubt social media will turn on its ear over a court case being built against the perpetrators of forgotten war crimes from the Bill Clinton presidency – But I can dream.

Back in February of 2016 I wrote a story about Yugoslavia and an alternative future we’d be experiencing had my country and its European puppet states destroyed that key nation. The storyline was widely cited and controversial to an extent, owing to the opinions of those from the newly established countries where Yugoslavia once stood. That report was about the loss to the peoples of those nations when a potential world power was vanished by outside forces. It said very little for the deep humanitarian scars though. When Bill Clinton authorized the destruction of the cement that held together the middle of Europe, he created a never-ending nightmare that needs to be felt. Now an international legal team has set out to get justice over NATO’s use of depleted uranium munitions, and the cancer related death and illness rising across that region since 1999.

According to these lawyers, as much as 15 tons of depleted uranium ammunition from various weapons systems deployed by NATO was used, and especially in Serbia. According to the RT report on the case, Srdjan Aleksic, is a Serbian lawyer who leads the legal team formed by the Serbian Royal Academy of Scientists and Artists, that includes lawyers from the EU, Russia, China and India. They contend that more than 30,000 people have fallen sick from exposure to the munitions in this year alone. I’ll address the munitions issue in a moment, but right here I’d like to strike the same chord I did in my earlier report on Yugoslavia by quoting award winning author of 23 books, Dr. Michael Parenti, who’s an American political scientist, political economist, and historian:

“The dismemberment and mutilation of Yugoslavia was part of a concerted policy initiated by the United States and the other Western powers in 1989. Yugoslavia was the one country in Eastern Europe that would not voluntarily overthrow what remained of its socialist system and install a free-market economic order. In fact, Yugoslavs were proud of their postwar economic development and of their independence from both the Warsaw Pact and NATO.”

My father was the Attorney General of the US state of Georgia for a time, and a constitutional lawyer, and advisor to both LBJ and Nixon. I know he would make use of this assertion by Parenti in order to establish “intent”, or in courtroom rhetoric he might say; “It goes toward establishing the intent to commit a crime, your honor”. If there were a jury present, the use of the term “mutilation” would be repeatedly drummed in, in order that the real judges might discern damages. But I digress, this is a civil liability matter amplified by a criminal act.

Wikipedia’s entry about the NATO bombing of Yugoslavia contains a photograph from an exhibit where there are three depleted uranium ordinance are on public display. There’s also a map showing the sites in Kosovo and western Serbia where these munitions were used. But that’s Wikipedia, and nobody uses Wikipedia as a viable source. So, this Le Monde diplomatique piece by Robert James Parsons is a better starting point for my report. His detailed assessment includes the allegation that investigators searching evidence of depleted uranium ordinance in Kosovo were impeded by NATO operators during their searches. For the reader, in March and April of 2001, UNEP and the World Health Organisation (WHO) published reports on the use of DU in the region based largely on investigators work on the ground, and work which was tightly supervised by NATO troops. The short version for this new legal team perhaps, is that NATO could easily have diverted investigators away from the worst areas of DU use, and probably did. Parsons’ various reports strike deep into the heart of the Serbia-Yugoslavia war crimes. Depleted uranium ordinance use in the Balkans and especially in Afghanistan are a legal time bomb about to explode. Hundreds of thousands of people may have turned themselves into internally radiated toxic waste carriers because of inhaling the dust from these munitions. I won’t go deep into Parsons’ research, but I was struck by his mentioning a US munitions factory that may have been the source of the weapons used in Yugoslavia:

“In a French TV documentary on Canal+ in January 2001 (7), a team of researchers presented the results of an investigation into a gaseous diffusion — recycling — plant in Paducah, Kentucky, US. According to the lawyer for 100,000 plaintiffs, who are past and present plant employees, they were contaminated because of flagrant non-compliance with basic safety standards; the entire plant is irrevocably contaminated, as is everything it produces. The documentary claimed that the DU in the missiles that were dropped on Yugoslavia, Afghanistan and Iraq is likely to be a product of this plant.”

The work of Parsons and other experts points to the United States of America using Iraq and other crisis areas for testing horrible weapons. The ramifications are staggering, if I am honest here. As an American and a veteran, having my belief system rebooted is not a comfortable exercise. Following the course the aforementioned researchers did, I’m led to a disturbing possibility, that the United States may have used depleted uranium not just for 30 mm and 120 mm armor and bunker piercing munitions like anti-tank rounds, but in smart bombs and missiles as well. Another independent investigator named Dai Williams pointed to the faulty UNEP report on DU use in the Balkans, and “a new generation of hard target versions of guided weapons (bombs and missiles) proposed in 1997 e.g. GBU-24, GBU-37, GBU-32, AGM-86D, AGM-65G, AGM-154C and latest versions of the BGM-109 Tomahawk.” Taken at face value, the purpose or mission of these weapons demands the capability supplied from using depleted uranium. Or in other words, the Pentagon needed depleted uranium to kill inside hardened bunkers etc. With reference to something called the “Hard or Deeply Buried Defeat Capability Program”, these reports are “at least” cause for an investigation – or a court case.

The question that arises is clear, sharp, and may lead to a damnable conclusion. “Does our government conceal from us the use of horrendous and outlawed weapons of destruction?” Given the Snowden revelations, the WikiLeaks Clinton and Podesta files, the WikiLeaks CIA leaks, and the mess in the world today…

The secrecy and the strange circumstances surrounding depleted uranium ordinance use in the Balkans, Iraq, and in Afghanistan point to cover up. The circumstances surrounding the initial UNEP and the World Health Organisation (WHO) point to a potential cover up. According to the investigators mentioned above, the Pentagon and NATO may well have carried out a “cleanup operation” in the former Yugoslavia before UNEP was even allowed in. The fact so few DU rounds were ever recovered there validates this thesis. Thousands of rounds fired at map locations absolutely traceable, and only a few DU munitions recovered? It may well be that the “lack of evidence” is really the evidence here. Turning to the medical side, every indication is that the people of these areas were affected. I’ll quote from a communication of Dai Williams from 2001:

“The population of Iraq appear to have had the highest DU exposure to date but they have also had the longest time for carcinogenic and mutagenic effects to appear.  Significant quantities of hard target guided weapons were used in the Balkans, including the regions policed by Italian and Spanish troops several of whom have died from Leukaemia.  With warheads ranging from 1000 lbs to 2 tons large quantities may have been used in Afghanistan – possibly comparable with the tonnage’s used in Iraq.  Medical evidence is bound to emerge whatever attempts the US and UK governments make to conceal the truth about these weapons.  If so the UN may need to revisit its recent resolution to ignore the DU issue in Iraq.”

Several studies from the mid-2000s showed increased levels of uranium contamination in human and environmental samples since the use of uranium weapons by US and UK forces in combat zones since 1991. Most disturbing in my research was this report from New Weapons Org that contained the following:

“… urine samples from civilians living near bombed targets in Afghanistan (UMRC 2002) showed very high levels of apparently natural uranium contamination – from 15 to 80x normal compared to the UK population (80 to 400 ng/litre compared to normal of 5 ng/litre). These observations led to the scenario that US weapons manufacturers may be using uranium alloys based on almost natural uranium feedstock instead of recycled depleted uranium.”

To sum up, I’ve alluded to a degree of “intent” being established in this current case on the use of illegal weapons in Serbia. It’s no stretch to advance the case further by showing the massive liability involved in irradiating Europe’s citizens with ordinance used in an illegal regime change at the continent’s center. Tens of thousands of people suffering health effects, no telling how many already dead, and the “motive” for covering up in such a case is immeasurable. So, if truth and equal justice is the goal of all western democracies, this new case needs to happen. And it needs to happen in full view of the people of our world. It’s time for a meme that may never come.

Phil Butler, is a policy investigator and analyst, a political scientist and expert on Eastern Europe, exclusively for the online magazine “New Eastern Outlook”.

Is Non-aligned Movement (NAM) the answer? Option worth considering