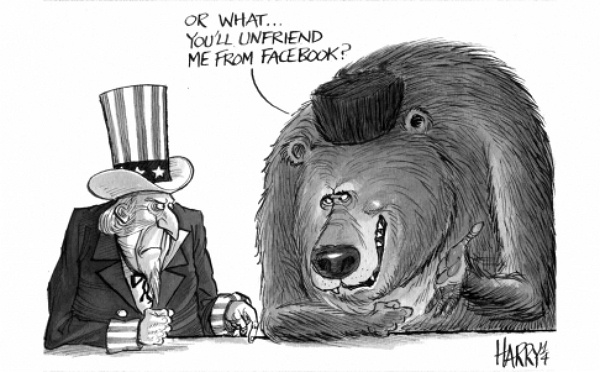 Neil Clark is a journalist, writer, broadcaster and blogger. He has written for many newspapers and magazines in the UK and other countries including The Guardian, Morning Star, Daily and Sunday Express, Mail on Sunday, Daily Mail, Daily Telegraph, New Statesman, The Spectator, The Week, and The American Conservative. He is a regular pundit on RT and has also appeared on BBC TV and radio, Sky News, Press TV and the Voice of Russia. He is the co-founder of the Campaign For Public Ownership @PublicOwnership. His award winning blog can be found at http://www.neilclark66.blogspot.com. He tweets on politics and world affairs @NeilClark66
Will the new tough sanctions package on Russia passed almost unanimously by Congress and awaiting the signature of President Trump be the straw that broke the camel’s back for the European Union?

The bill, which also targets Iran and North Korea, not only expands sanctions against Russia and potentially throws a massive spanner in the works of the Nord Stream-2 gas pipeline between Germany and Russia, but also seeks to limit the president’s ability to ease, or lift the sanctions in the future. The message from the neocon dominated Congress is clear: Russia must be kept in the ’sin-bin’(until of course a nice ‘liberal’ who will do everything the hawks in Washington demand comes to power), and economic/business links between Europe and Russia must be broken.

European leaders, many of whom would like to see sanctions on Russia eased have been quick to voice their disapproval. They know the huge cost to their economies the sanctions and Russian countermeasures have had, €4 billion to Italy alone, and further escalation of financial warfare with the Kremlin would be utterly disastrous.

Why should European companies and workers suffer because of the anti-Russian obsession of the American elites? Do we honestly think the US would impose sanctions on a country to its great economic detriment if European countries demanded it? You can literally bet your bottom dollar that they wouldn’t.

“I think the US sanctions are absolutely unacceptable. You can’t mix up political and economic interests, at the expense of European jobs,” was the angry verdict of Austria’s Chancellor Christian Kern.

‘‘Sanctions against Russia should not become a tool of industrial policy in US interests,” said Martin Schaefer, spokesman for the German Foreign Ministry.

Alas, that’s what’s been happening for some time now – and Donald Trump has nothing to do with it.

The sad truth is that since the era of strong, independently-minded leaders such as Charles de Gaulle, Olof Palme, and Bruno Kreisky, Europe HAS subordinated its interests to that of the US and lobbies operating in the US.

Take the 2012 EU sanctions on Iran. At first, Europe resisted pressure from the US (and the pro-Israel lobby), to impose an oil embargo on Tehran over an unproven nuclear weapons program. They eventually succumbed – to great cost to EU member states such as Greece, Spain, and Italy who benefited from the importation of cheaper Iranian oil.

So often in recent years, Europeans have been left picking up the tab for neocon policies.

Consider the refugee crisis. This has been caused in large part due to US-led ‘wars of intervention’ in the Middle East and elsewhere. The vast majority of refugees heading to Europe are coming from countries like Afghanistan, Iraq, Libya, Somalia, and Syria, which have either been attacked or invaded by the US or where Washington has backed proxy forces to topple the governments. Of course, imperialistic European countries, under craven ’Atlanticist’ leadership, have played a key role in these conflicts too, with Britain particularly culpable and France too, in regards to the destruction of Libya.

While some European countries, like Germany, have opened their doors quite widely to refugees fleeing the war zones the US has lagged some way behind.

“The US accepts far fewer Syrian refugees than other Western countries,” notes the Guardian.

Now lawmakers on Capitol Hill want to hit European pockets even harder. Congress is clearly out to sabotage the Nord Stream-2 pipeline, with its proposal the US would be able to sanction any company which was involved in the maintenance or development of Russia’s energy export pipelines.

“This bill, if it comes into force, would allow measures against European natural or juridical persons for situations that have no connection with the United States,” declared a statement from the French Foreign Ministry.

Of course, that’s utterly outrageous. But again it’s not without precedent. In 1996 Congress passed the Iran and Libyan Sanctions Act, giving the US the right to impose economic sanctions on firms doing business with those two countries. The Helms-Burton Act of 1996 also penalized foreign companies that did business in Cuba, by preventing them doing business in the US.

It’s not enough the US sanctions countries it doesn’t like, everyone else has to join in too. Or else.

Apologists for 21st-century imperialism would call this “fighting for democracy and human rights.” Straight-talkers would call it what it is: bullying.

We only have to follow the money trail to see who benefits from all of this. If European-Russian energy projects are scuppered, US gas companies, offering more expensive liquefied natural gas, would be the big winners.

Back in June, the first US natural gas was shipped to Poland. “The United States is in a position to start aggressively marketing gas exports to Europe because of its “”fracking revolution,”…After decades of consuming nearly all of the energy it produced, the United States is now expected to become the world’s third-largest exporter of gas by 2020,”enthuses the CIA-seed funded, RFE/RL.

This desire, to dominate Europe’s energy market, and the childish desire of hawks in Congress to get Donald Trump to ‘prove’ he is not a ‘Russian agent’ by signing a bill that will kill off any hopes of better relations between Washington and Moscow, is the background to the new sanctions legislation.

If Europe doesn’t oppose it forcefully, then it’s effectively signing up to its own assisted suicide. Moscow has already said it doesn’t rule out any measures ‘to bring the US to its senses’- and as a first step has ordered the US to reduce its embassy staff in Moscow to 455 people (from about 1,100) and to stop using storage facilities.

Do EU leaders want to join in with foaming-at-the-mouth US neocons and ’liberal hawks’ in their fanatical crusade against Russia? Again, if war does break out, as some seem to want, it’ll be Europe that takes the biggest hit, and not the US.

It’s not hard to find historical parallels. The subservient EU relationship to Washington in recent decades can be compared to the ’Dual Monarchy’ of Austria-Hungary which officially came into being in 1867. While Vienna and Budapest had ’equal’ status, it was clear who called the shots – literally. When Archduke Franz Ferdinand was assassinated in Sarajevo in June 1914, it was the Hungarians who urged caution. Hungarian Prime Minister, Count Istvan Tisza, was opposed to any military assault on Serbia without prior diplomatic action and opposed giving Belgrade a list of demands that would be impossible to fulfill. In the end, he capitulated – and the Great War started.

“Tisza resisted for a fortnight,” notes historian Peter Hanak. “In spite of this though, Austrian and German politicians, together with the military, finally convinced him that the time was now ripe for the Central Powers to go to war. Any delay would only serve the interests of the Entente-made up of the ‘enemies’: France, Britain, and Russia.”

The result was a catastrophe not just for Hungary, which lost around two-thirds of its territory, but the whole of Europe. And, in October 1918, Tisza, the man who had caved-in to external pressure, against his own country’s best interests, was shot dead after angry soldiers and workers broke into his house.

As in 1914, Europe is now at a critical point in its history. Will its leaders ‘do a Tisza’ and surrender to the war-hawks, or will they resist the pressure to agree- or acquiesce- to an anti-Russian, anti-European policy which they know is not in their countries’ interests? The next few weeks will tell us all.

India does not hide interest in the Arctic