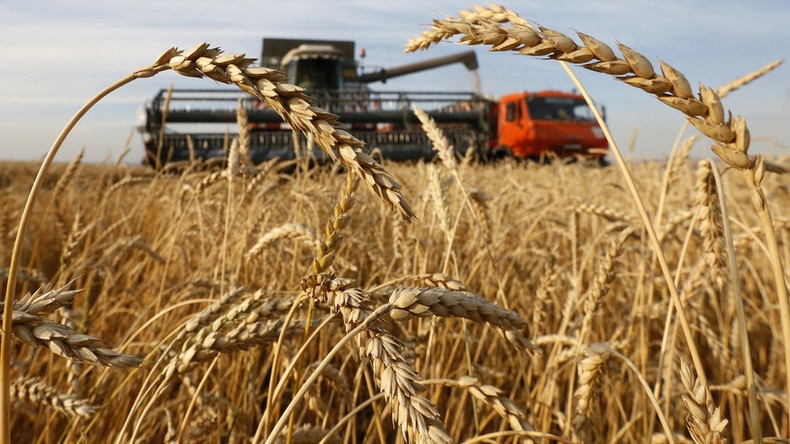 The US is being pushed out of the grain market as Russia’s bumper wheat harvest has dragged down prices to record lows. Russian agricultural exports are booming thanks to a weaker national currency and massive investment.

“We are pushing America aside in some markets, and we are satisfied with this,” said Russia’s Agriculture Minister Aleksandr Tkachev.

This year Russian farmers are expected to harvest the biggest crop in over a century. Russia will produce at least 83 million tons of wheat in the current growing season, according to estimates by The Wall Street Journal.

Lower prices and close proximity to large markets gives Russia an advantage, according to the General Director of the Institute for Agricultural Market Studies Dmitry Rylko.

“A relatively weak ruble is good for the Russian wheat market. We see either gradual or rapid growth for our exports,” the expert told RT.

However, the figure announced by the Russian government earlier this year is much more impressive. The Moscow-based grain consultant ProZerno estimates a harvest of over 130 million tons. It is 2.6 percent more than the previous record set in 1978 before the Soviet-Afghan War.

“Today our task is to set reasonable prices across the country. The grain crop of 130 million tons, there is more to come. It may reach up to 200 million tons. The main thing is to find new sales markets,” said Tkachev.

The US agricultural sector has faced lousy weather this season, meaning fewer acres of wheat were sowed in 2017 than ever before. US wheat output is expected to decline by a quarter compared to the previous season.

Unfavorable conditions along with Russia’s resurgence pushed wheat prices at the Chicago Board of Trade down almost 25 percent to $4.19 a bushel (about 27 kilograms) compared to July, when Russia began a record wheat harvest. The US Wheat Associates trade group announced the shutdown of its office in Egypt, the world’s biggest wheat importer.

“We literally can’t compete on the price of wheat in those markets compared to Russia,” said the trade group’s spokesman Steve Mercer, as quoted by the WSJ.

According to the US Agriculture Department, American wheat will make up just 15 percent of global exports in 2017, down from half four decades ago. The plunge was also caused by more grain grown in Europe and India. The US will produce half as much as Russia, according to the department.

Last year, Russia managed to become the world’s leading producer and exporter of grain, after shipping 34 million tons from its 119 million ton harvest. Exports of Russian wheat are expected to increase to 40 million tons this year, according to the agriculture ministry.

“No one is leaving the market. The Americans are rather better at corn and soybean farming, and they are successfully doing that while losing position in wheat,” Rylko told RT.

Russians love Made in Russia

President Vladimir Putin has led the national charge toward self-sufficiency, arguing food generates more export income for Russia than arms. He has even vowed to become the world’s biggest supplier of organic food, ushering in a potential culinary Cold War with the bio-engineered mega-farms of the U.S.

Agriculture Minister Alexander Tkachev captured the mood in late September when he announced Moscow’s ban on European food was having such a positive effect in bolstering domestic output that he wanted sanctions to last longer. “We are interested in keeping them for another five years,” he told the Rossiya 24 TV channel, backsliding into one of the Kremlin’s more traditional timetables for economic plans. “Russian consumers are now happy to be looking for Russian-made goods in shops,” he added.

Russia hasn’t eradicated foreign products from supermarket shelves, but it has moved toward greater self-sufficiency. The country imported 36 percent of its food in 2013, before the EU’s sanctions and Moscow’s retaliatory embargo. In 2015, that figure dropped to 28 percent. In 2016, according to preliminary data, that fell again to 24 percent in the first quarter and 22 percent in the second.

Where Russia struggles to make up the shortfall — in fruit and dairy, for example — it has scrambled to find new trading partners. Moscow has approved dairy imports from New Zealand and has opened up to Asian dairy investments from Vietnam and Thailand.