The Astana Economic Forum in Kazakhstan centered on how mega-partnerships are changing world trade. Participants included the president of the Asian Infrastructure Investment Bank (AIIB) Jin Liqun; Andrew Belyaninov from the Eurasian Development Bank; former Italian Prime Minister and president of the EU Commission Romano Prodi; deputy director-general of the WTO Alan Wolff; and Glenn Diesen from the University of Western Sydney.

Diesen, a Norwegian who studied in Holland and teaches in Australia, is the author of a must-read book, Russia’s Geoeconomic Strategy for a Greater Eurasia, in which he analyzes in excruciating detail how Moscow is planning “to manage the continent from the heartland by enhancing collective autonomy and influence, and thus evict US hegemony directed from the periphery.”

In parallel, as Diesen argues, Moscow aims “to ensure the sustainability of an integrated Eurasia by establishing a balance of power or ‘balance of dependence’ to prevent the continent from being dominated by one power, with China being the most plausible candidate.”

In a nutshell; this New Great Game installment revolves around “Russia’s strategy to enhance its bargaining power with the West by pivoting to the East.”

Concerning Astana, Diesen told me that the AIIB’s Liqun “took the hardest stance in defense of diversifying financial instruments, while Belyaninov was very critical of anti-Russian sanctions.”

Diesen argues that: “The emergence of economic mega-blocks actually improves economic relations by creating more symmetry. For example, China’s CIPS (Cross-Border Interbank Payment System) undermined the ability of SWIFT (Society for Worldwide Interbank Financial Telecommunication) to be used for economic coercion, while CIPS and SWIFT still cooperate. Similarly, the EAEU [Eurasia Economic Union] gets its strength from the ability to integrate with other regions as opposed to isolating itself.”

And here’s the clincher: “China’s cooperation with the EAEU mitigates Russian concerns about asymmetries, and enables greater EAEU-BRI [Belt and Road Initiative] integration under the stewardship of the SCO. Also, unlike the EU, the EAEU provides great benefit to non-members (non-zero sum) by creating an effective transportation corridor with harmonized tariffs, standards, etc.”

Diesen remarked how Liqun, a key character in the whole game, “is very positive about the Eurasian Economic Union and insistent on the positive-sum game of integration of regions.” Liqun is “direct, honest and forceful” and does not refrain from criticizing the Trump administration, arguing “there is not a trade war between the US and China, it is a US trade war against the world.”

Add to the debate the crucial Astana headline, ignored by Western corporate media: Iran signed a provisional free-trade-zone agreement with the EAEU, lowering or abolishing customs duties, and opening the way for a final deal in 2021. For Iran, that will be a golden ticket to do business way beyond Southwest Asia, integrating it further with Russia and also Kazakhstan, which happens to be a key member of the Belt and Road Initiative (BRI).

All about Eurasian integration

The St. Petersburg International Economic Forum (SPIEF) is the annual Russian equivalent of Davos. Predictably, coverage on Western media was appalling – at best rehashing bits and pieces of the joint press conference held by presidents Vladimir Putin and Emmanuel Macron.

There was no mention, as Asia Times previously reported, of how Moscow was instrumental in ironing out differences between North and South Korea at the Far East summit in Vladivostok last September, impressing the need for a win-win regional business plan; the integration of the Trans-Siberian with a future Trans-Korean railway, a key plank of Eurasia integration.

When it comes to tracking Eurasia integration, SPIEF is invaluable. The St Petersburg get-together has also been a traditional forum for key SCO discussions. One panel illustrated how the Shanghai forum is fast advancing on the trade and economic front; new members India and Pakistan are now very much active in the SCO Business Council. The discussion of the business, industrial and technological agenda for observer states was also important; that’s where Iran, a future full SCO member, fits in.

Eurasia integration also featured on another panel about new logistical routes opened by international transport corridors – very much the stuff BRI and the EAEU are made of.

And the BRICS revival was also part of the picture, as attested by this panel on the BRICS in Africa “leveraging the Fourth Industrial Revolution” for economic development, featuring the president of the BRICS’s New Development Bank (NDB), Kundapur Kamath, and Jiakang Sun, the executive vice-president of Chinese giant COSCO Shipping Corp.

Yet the clincher in terms of possible game-changing relations between Russia and Europe came from Finance Minister and first deputy Prime Minister Anton Siluanov: “As we see, restrictions imposed by the American partners are of an extraterritorial nature. The possibility of switching from the US dollar to the euro in settlements depends on Europe’s stance toward Washington’s position.”

So once again the EU was on the spot – on both crucial fronts, Iran and Russia. Siluanov left the door wide open: “If our European partners declare their position unequivocally, we could definitely see a way to use the European common currency for financial settlements, such as payments for goods and services, which today are often subject to restrictions.”

Siluanov did not fail to mention that Russia, as much as China and Iran, is already bypassing the US dollar. That accounts for three crucial nodes of Eurasian integration, and that’s the way to go for BRI, EAEU, SCO and BRICS.

Meanwhile, the Shangri-La Dialogue in Singapore has been the top venue for defense diplomacy debate in the Asia-Pacific since 2001.

With the “Indo-Pacific” concept is hyped to the extreme, it was up to Indian Prime Minister Narendra Modi, the keynote speaker, to strike a deft balancing act.

Even as Modi said the Indo-Pacific should not develop as an exclusive club, he took pains to stress that “Asia and the world will have a better future when India and China work together in trust and confidence. No other relationship of India has as many layers as our relationship with China.”

China’s Foreign Minister Wang Yi dismissed the “Indo-Pacific” push as an “attention-grabbing idea” that will “dissipate like ocean foam,” as he hopes that the Quad – US, India, Japan, Australia – does not focus on targeting China, like the previous Obama administration “pivot to Asia.”

The problem is the Indo-Pacific focus, in practice, amounts to a military counterpunch to BRI, with no wide-ranging economic cooperation dimension apart from sketchy plans for a “new global infrastructure.” Compare it, for instance, with China financing over 130 projects within the Lancang-Mekong Cooperation framework, integrating Cambodia, Laos, Myanmar, Thailand and Vietnam into the Chinese economy.

BRI is a multi-trillion-dollar, multinational, decades-long, inclusive project. As Wang Yiwei, a senior research fellow at the Chongyang Institute for Financial Studies of the Renmin University of China, said “All SCO members are participating in BRI, and this organization [SCO] is the initiative’s security guarantee.”

Yet when it comes to the Indo-Pacific sphere, the US, Japan and Australia are not SCO members. And India still refuses to acknowledge the SCO is interlinked with BRI.

Moreover, everything about BRI cannot but clash front-on with the depth and reach of the US across Asia. So the security stress is inevitable. The 10-nation ASEAN, caught in the middle, is adopting at best a “wait and see” strategy. Indonesia at least is venturing a step ahead, promoting a non-confrontational “Indo-Pacific cooperation concept.”

The bottom line is that China’s relentless drive to multiply Chinese-organized solutions in international relations is unstoppable. As in Wang Yi’s discreet but forceful diplomacy leading to Kim Jong-un’s first visit to China; President Xi solidifying his role as the go-to leader of globalization 2.0; and the Chinese leadership as a whole arguing that the future of Asia-Pacific security cannot be hostage to a Cold War 2.0 mentality.

US Defense Secretary James Mattis’ warning to China in Singapore of “much larger consequences” if its sovereignty expansion across virtually the whole South China Sea is not contained may be an idle threat. Beijing has no intention to restrict freedom of navigation in the South China Sea; for a mercantile giant, that would be counter-productive. The whole game is about high-stakes geopolitical control. Even the new head of the renamed US Indo-Pacific Command, Admiral Philip Davidson, had to admit to the US Senate that short of war between China and the US, Beijing will prevail in the South China Sea.

Welcome to the post-Westphalian world

In his latest, avowedly “provocative” slim volume, Has the West Lost It? former Singaporean ambassador to the UN and current Professor in the Practice of Public Policy at the National University, Kishore Mahbubani frames the key question: “Viewed against the backdrop of the past 1,800 years, the recent period of Western relative over-performance against other civilizations is a major historical aberration. All such aberrations come to a natural end, and that is happening now.”

It is enlightening to remember that at the Shangri-la Dialogue two years ago, Professor Xiang Lanxin, director of the Centre of One Belt and One Road Studies at the China National Institute for SCO International Exchange and Judicial Cooperation, described BRI as an avenue to a ‘post-Westphalian world.’

That’s where we are now. Western elites cannot but worry when central banks in China, Russia, India and Turkey actively increase their physical gold stash; when Moscow and Beijing discuss launching a gold-backed currency system to replace the US dollar; when the IMF warns that the debt burden of the global economy has reached $237 trillion; when the Bank for International Settlements (BIS) warns that, on top of that there is also an ungraspable $750 trillion in additional debt outstanding in derivatives.

Mahbubani states the obvious: “The era of Western domination is coming to an end.” Western elites, he adds, “should lift their sights from their domestic civil wars and focus on the larger global challenges. Instead, they are, in various ways, accelerating their irrelevance and disintegration.”

Meanwhile, Eurasian integration, as depicted in Diesen’s book, is slowly but surely redefining the future. 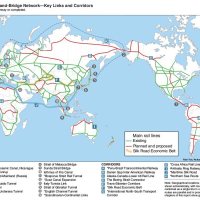