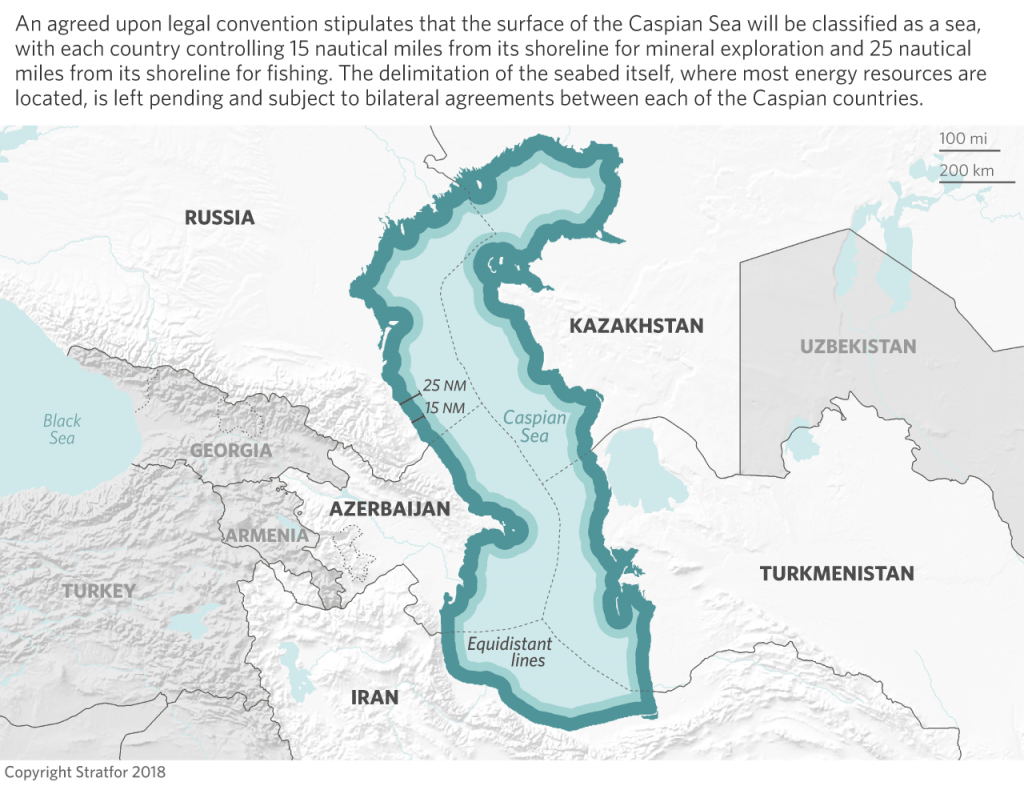 As the US/Turkish relationship deteriorates it is having spillover effects around the region. Turkish President Recep Tayyip Erdogan’s continued defiance of US’s demands have placed Turkey in the cross-hairs of a vicious hybrid-war attack on the country’s fragile economic foundation.

So, I find it very interesting that during the week of the greatest turmoil in Turkish markets, notably a panic in the Turkish Lira, the five nations bordering the Caspian Sea reach an historic agreement which remained elusive for over 20 years.

And at the heart of that disagreement has been Azerbaijan’s claims over oil and gas rights in the Caspian which rankled both Turkmenistan to the north and Iran to the south.

For the past few years, as US/Russian relations have cratered, Russian/Azeri relations have improved. And it has been the diligent work of both Russian President Vladimir Putin and his Foreign Minister Sergei Lavrov which laid the groundwork for this agreement.

Putin first organized a trilateral summit between himself, Azeri President Aliyev and Iranian President Rouhani two years ago this month.

But, more importantly, it has been Putin and Lavrov’s steady and consistent diplomatic efforts to improve relations between Russia and all the former Soviet states which the US has worked diligently since the early 1990’s to harm.

Azerbaijan has always fallen on the US side of the geopolitical chess board.

On top of this is Russia’s very successful campaign in countering the US/Saudi/Israeli-led civil war in Syria which resulted in a very significant turn in Russian/Turkish relations. And this, to me, is the key to understanding why these long-frozen conflicts around the region are changing, sometimes, like this weekend’s summit, dramatically.

To this point Russia has taken everything the US has thrown at it and survived. And if you don’t think smaller players like Azerbaijan aren’t taking notice, then you are hopelessly naïve. A Russia capable of standing up to the US is a Russia capable of being a valuable regional partner.

And that partnership extends around the entire region.

Take the frozen conflict of Nagorno-Karabakh, for example. For the past twenty-plus years Turkey has backed Azeri claims and Russia, tacitly, Armenia’s. But, despite a flare-up a couple of years ago, just hours after US Secretary of State John Kerry left Baku, settling Nagorno-Karabakh is on everyone’s mind.

Over the weekend Nagorno-Karabakh was on the diplomatic menu in the meeting between Lavrov and his Turkish counterpart, Movlut Çavuşoğlu.

Even the new Armenian Prime Minister, Nikol Pashinyan, is ready to discuss the conflict.

“We have expressed political willingness to continue talks on Nagorno-Karabakh in a constructive way, in line with our political obligations and in the context of Armenia’s interests. However, a preparatory stage is required to revive negotiations, especially in the current political situation,” he stressed.

Pashinyan added that Yerevan “is ready for any scenario on Nagorno-Karabakh.”

I expect that a deal over Nagorno-Karabakh will be brokered by Russia with Turkey’s support now that Turkey will be dependent on Russia for its financial survival as it pursues a painful and necessary de-dollarization process, the beginnings of which have already begun.

With reports that the US is in peace talks with moderate factions within the Taliban out there, the possibility of a withdrawal becomes greater. Moreover, the Caspian Sea agreement precludes any third-party military presence, another sign of Azerbaijan’s shift away from the US’s orbit.

The regional change doesn’t stop there, however. The recent election of Imran Khan in Pakistan changes that country’s role again in the direction of Russian and Chinese integration plans, especially in brokering a long-term stabilization plan for Afghanistan.

The message is becoming very clear to all the smaller regional players, the board is changing. And you can be a part of it or you can be left behind. The US’s plans for permanent chaos in central Asia has harmed all of these places and now is the beginning of the transition period.

I’ve held from the moment it began that Russia’s intervention in Syria would mark the peak of the US’s ability to project power around the world, this is certainly now true in central Asia and the Middle East.

The current defiance by Turkey is another aftershock of that intervention which revealed the lies which everyone on the ground in Syria knew about but felt powerless to change.

That’s why Russia’s intervention and success was so significant. It created an Axis of Resistance that was credible and would pay the kinds of dividends we are seeing today.

This is not to downgrade the contributions of Russia’s partners in Syria, the Syrians themselves, Iran and Hezbollah, but it was Russia that tipped the balance of power in Syria. Because under no circumstances were the Obama or Trump administrations willing to risk a direct conflict with Russia over Syria.

Hillary Clinton was a different story, but, thankfully, one we never had to experience.

So, for Azerbaijan its relationships with its neighbors are about to undergo a sea change, which should see meat put on the bones of this weekend’s agreement about oil and gas rights.

Note, also that while Trump is adamant about there being no exemptions to trading with Iran after November, that the US State Department issued a waiver for Azerbaijan’s Southern Gas Corridor project which it partners with none other than British Petroleum.

The Southern Gas Corridor is one of those ridiculously expensive work-arounds created by US geopolitical meddling to free Europe from the yoke of Russia’s cheap and abundant gas supplies.

Royal Dutch Shell and France’s Total were not given such waivers over the former’s involvement with Nordstream 2 or the latter’s deal with NIOC, which China’s CNPC took over at a discount.

As I’ve said before, never go nuclear in your negotiations, if your bluff is called you are left standing naked as the tide recedes. And the US’s real strength in central Asia has been for many years a weak and disjointed Russia allowing the chaos sowed to flourish.

That condition is no longer in effect and all that’s left for the US is unsustainable military deployments, both financially and logistically, and growing discontent at an international system of trade and finance which is abusive.

Viewed in that context, this weekend’s surprise agreement shouldn’t be much surprise at all.