Eco-geopolitical logic would dictate that the world’s two largest economies should end their trade war. Indeed, it should never have started. The tit-for-tat tariffs are not only hurting both sides, but also those countries – Japan and South Korea, among others – that are involved in the US-centered global supply chain.

According to the US-based Trade Partnership Worldwide, 2 million US jobs would be on the line if President Donald Trump imposes a 25% tariff on an additional US$250 billion worth of Chinese “imports.” The consultancy already found that existing tit-for-tat tariffs have shaved US gross domestic product by 0.37%, put more than 950,000 people on the unemployment line, and reduced real family income by almost $900 annually.

The economic loss should not be a surprise because the majority of Chinese “imports” were in fact “made by America in China.” This amounts to imposing a tax on US intermediate and final products, culminating in raising production costs and consumer prices. Tit-for-tat tariffs caused farm and energy exports to China to decline sharply, culminating in the largest number of farmers declaring bankruptcy in 2018 than at any period since the 1930s-era Great Depression, according to the US Bureau of Statistics.

China is not left unscathed because its GDP growth slowed from 6.8% in 2017 to 6.6% in 2018, according to International Monetary Fund figures. What’s more, the tariffs instilled a sense of economic pessimism, as demonstrated by a fall in real-estate development and factory downsizing or even closures.

Japan and South Korea, whose economies are closely linked to those of China and the US, have been hit hard. Many of the parts in the products of US brands such as Apple are produced in these two and other Asian countries. The fewer iPads or iPhones that are produced, the fewer the parts needed.

Given these losses, there is every reason for the US and China to reach a deal on ending the trade war. On that China seems to be showing leadership, indicating that it will buy substantially more US products, ranging from agriculture to energy, to lower the trade-deficit figures. China has also signaled that it will meet the US halfway in addressing intellectual-property theft and forced technology transfer.

On market access, China is more open than the US. For example, US foreign direct investment (FDI) in China has risen, according to China’s Ministry of Commerce, but Chinese FDI in the US has plunged almost tenfold since Trump ascended to the presidency, from US$45.6 billion in 2016 to US$4.8 billion in 2018, according to a study conducted by the US law firm Baker McKenzie.

The Trump administration, along with the Congress, has routinely blocked Chinese investment for national security reasons. For example, the government prevented the US telecommunications giant AT&T from partnering with Huawei to market the latter’s smartphones in America. So far, there is no credible evidence to suggest the Chinese government has used Huawei or any Chinese telecommunications products to spy on the US or any other country.

Surely the US government must be aware of the trade war’s consequences. Further, its accusations against China are just that, speculations. This raises the question: Might there be another motive for the trade war?

History shows that the US wanted to dominate the post-World War II global economic and geopolitical systems. At the 1944 Breton Woods Conference, the US representative, Harry Dexter White, insisted on the greenback being the world’s reserve currency, and that the IMF and World Bank be under US control. On the General Agreement on Tariffs and Trade (GATT), the US practically wrote the rules of tariff reductions.

Some historians belonging to the “revisionist school” argued that the Marshall Plan was meant to strengthen US dominance. The “generous” aid and loans were given only to countries adhering to US values and norms. But the funds had to be used to buy US products. They suggested that while the Marshall Plan helped Europe and East Asia recover from the bombings of World War II, its primary purpose was to block Soviet communist expansion, which it succeeded in doing.

Fast-forward to today, and China’s rise is seen as a “threat” greater than that of the former Soviet Union because the Asian giant is nearing parity with the US in economic, military and technological prowess. Although China’s military is less advanced and powerful than that of the US, it could inflict unthinkable damage to American lives and property if China were to attack. China is fast narrowing the technology gap and in some cases – fifth-generation telecom technology, artificial intelligence (AI), etc – it has surpassed the US.

Because 5G and AI technologies have both economic and military implications, the US political and security communities are alarmed and determined to stifle China’s innovation advancement. For example, it is not only banning Huawei and other Chinese-made telecom equipment from the US but is also pressuring allies and other countries to do so as well. The US even pressured Canada into arresting Huawei’s chief financial officer on alleged fraud charges when she made a stopover in Vancouver en route to Mexico.

The US is ratcheting up tensions with the Asian giant in the geopolitical area, playing with the “two-China” policy, and introducing legislation allowing high-level government and military exchanges with Taiwan. The latest move is some Republican senators proposing to invite Taiwan’s leader to speak before a joint session of Congress. Meanwhile, the US Navy is stepping “freedom of navigation operations” in the South China Sea and inviting allies to join it.

In short, the US political and security establishments will not allow China to surpass American economic, military and technological supremacy. Senior Trump officials such as Robert Lighthizer, John Bolton and Peter Navarro have said as much. Trump himself said a deal must involve structural changes, meaning the Chinese government must stop subsidizing state-owned or privately owned enterprises’ innovation push.

Against this backdrop, it could therefore be argued that a trade deal that is acceptable to the US is China giving up its 2015 “Made in China 2025” initiative, a 10-year industrial policy meant to transform the economy from labor-intensive manufacturing to value-added. To achieve its goal, the government focuses on high-technology products, lavishly funding telecommunications, AI and research and development activities. The policy is working, explaining the “tough” American stances on China.

However, the Chinese government is highly unlikely to give up its “Made in China 2025” policy because that would put it behind the US indefinitely. There is also an extraterritoriality aspect because the US, in fact, is demanding that China surrender its sovereignty, something the Asian giant would not and should not do.

Besides, it is unclear who will be hurt more by the trade war, China or America. Chinese “exports” to the US represent only 4% of China’s GDP and consist mostly of goods “Made by America in China.” What’s more, the amount could be consumed by China’s huge domestic market of 1.4 billion, more than 400 million of whom are in the middle class, a person earning between $12,000 and $72,000 annually. Its successful Belt and Road Initiative involving 80 participating countries is another outlet for Chinese products. Therefore, the Chinese economy would suffer in the short run, but would likely emerge stronger in the medium to long term.

Sadly, the US political and security establishments are more interested in maintaining supremacy than in enhancing the interests of the country and people. Therefore, reaching a deal to end the trade war might not be forthcoming. And even if one is reached, it may not last.

KKen Moak taught economic theory, public policy and globalization at university level for 33 years. He co-authored a book titled China’s Economic Rise and Its Global Impact in 2015. HIs second book, Developed Nations and the Economic Impact of Globalization, was just published by Palgrave McMillan Springer. 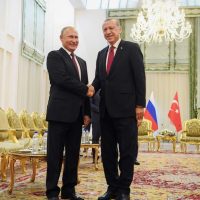