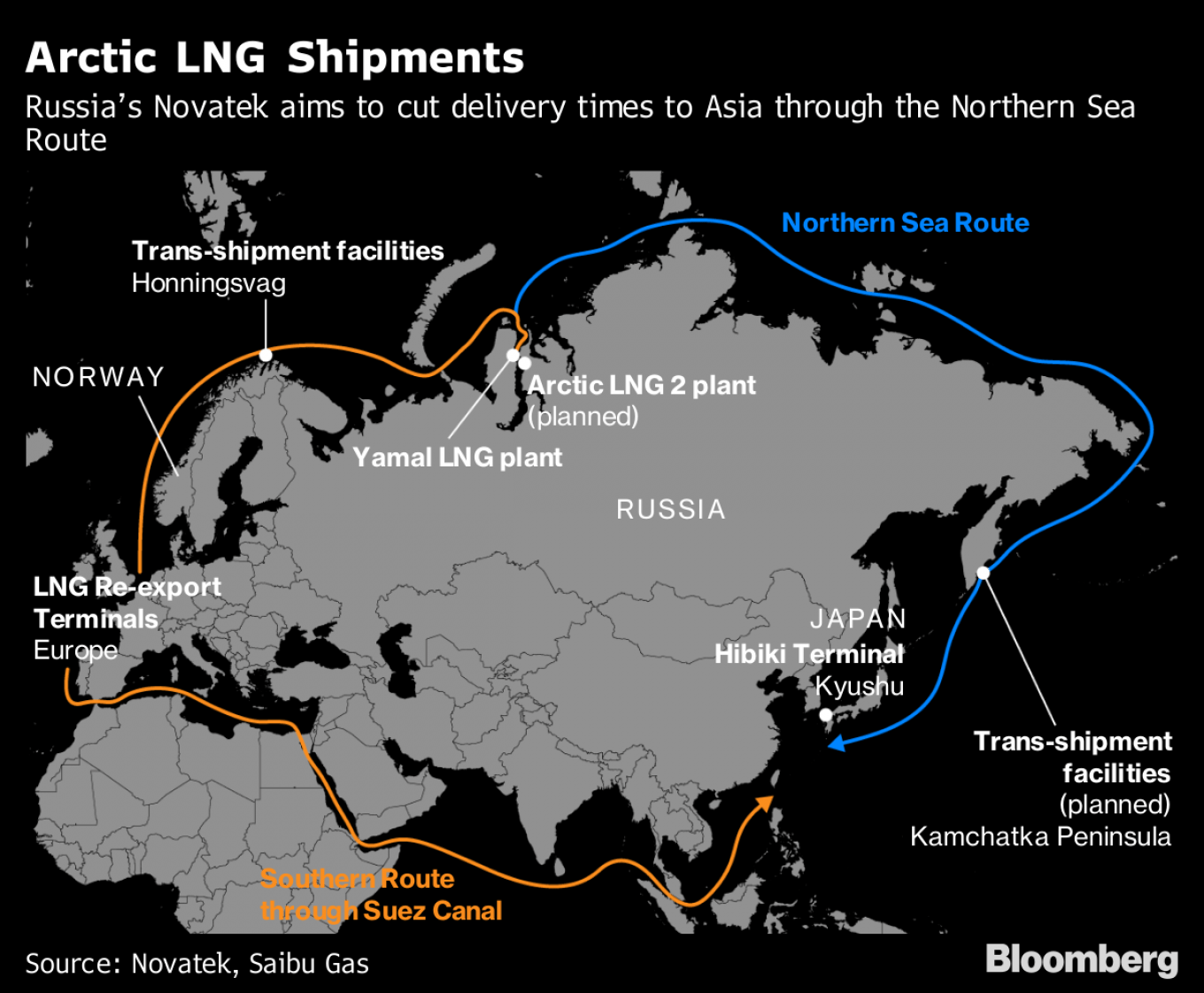 Russia ships most of its LNG (around 69 percent) to Asian markets, where the bulk of global LNG supplies are sent. The country could also export its LNG via traditional Russian pipeline gas European routes, due to low cost and short transportation distance, the minister wrote, in an article for the Energy Policy journal.

“Russia’s convenient geographical position between Europe and Asia allows our LNG to be profitable at current prices and to win competition from the US and Australia,” Novak said. “If necessary, we can deliver liquefied gas to any European country, and it will be faster and cheaper than many other suppliers.”

The Northern Sea Route (NSR) could be a key transport link to connect massive Arctic energy projects Russia is currently developing with target markets. The route, which lies in Arctic waters and within Russia’s Exclusive Economic Zone, could cut the transportation time by a third, compared to shipments via the Suez Canal.

Russia is one of the world’s leading exporters of natural gas. Last year, it produced more than 40 billion cubic meters of LNG – a nearly 50 percent increase from 27 billion cubic meters it had in 2018. By 2035, Novak expects the country to boost production to 120 million tons, amounting to around a fifth of the forecasted global LNG production.

European countries should rely on US gas imports to ensure their energy security, US President Donald Trump announced at the World Economic Forum in Davos.

“With an abundance of American natural gas now available European allies no longer have to be vulnerable to unfriendly energy suppliers,” Trump told the audience as he boasted that the US had outpaced other countries “by far” in oil and gas production.

We urge our friends in Europe to use America’s vast supply and achieve true energy security.

The statement falls in line with US efforts to boost its energy shipments to Europe, especially imports of liquefied natural gas (LNG). Meanwhile, many European nations have already stressed that they want to diversify their sources of energy, and the Nord Stream 2 gas pipeline from Russia could be one of the ways to achieve this.

However, Washington has recently issued an ultimatum to European companies involved in the Russia-led project, threatening to impose harsh sanctions on them unless they ditch it. Fearing the restrictions, the Swiss-Dutch company Allseas stopped all work on the final stages of the project and withdrew its vessels from the construction area in the Baltic Sea in December.

The US approach has already been criticized in Europe, with German Chancellor Angela Merkel saying that “sanctions are the wrong way to go.” As she met Russian President Vladimir Putin, she also stressed that Nord Stream 2 is set be finished against all odds by the end of 2020 or early 2021.

New Delhi is considering participating in Russian oil and liquefied natural gas (LNG) projects in the Arctic as cooperation with Moscow could open vast opportunities for India in the resource-rich region.

“We are establishing cooperation in geological exploration, joint development of oil and gas fields on the territories of the two countries, including offshore projects, which will eventually allow India to become the first non‑Arctic state to extract resources in the Arctic,” Russian Foreign Minister Sergey Lavrov said in an interview with the Times of India

India, one of the largest and fastest growing LNG markets, wants to get Russian LNG from the Arctic to satisfy its growing energy demand. It could join the Arctic LNG project led by Russian energy giant Novatek, according to India’s Minister for Petroleum and Natural Gas Dharmendra Pradhan.

“We are also studying the opportunities to participate in the future Novatek project in the Arctic. We are looking into all the opportunities to get LNG from this region,” the minister told reporters on Wednesday.The interest in Russian gas supplies comes as India turns away from joint projects with neighboring Pakistan. New Delhi has refused to sign a memorandum of understanding on the Iran-Pakistan-India gas pipeline construction amid escalating tensions with Islamabad.

“We don’t want to deal with Pakistan. We are more interested in Russian LNG,” Pradhan said.

In September, Russia’s Novatek and India’s H-Energy Global signed an agreement on LNG supplies to India on a long-term basis. The memorandum of understanding envisages joint investment in future LNG terminals of the two companies, as well as establishing a joint venture to sell LNG and natural gas to customers in India, Bangladesh and other countries.

Crude reserves in Russia’s Arctic are also attracting Indian companies willing to invest into the massive Vostok oil project. According to Pradhan, the project is “very interesting” for the country, but he did not elaborate on how much it is going to invest. Vostok Oil is a joint venture between state-owned oil major Rosneft and private oil producer Neftegazholding (NGH) with the projected production of up to 100 million tons.