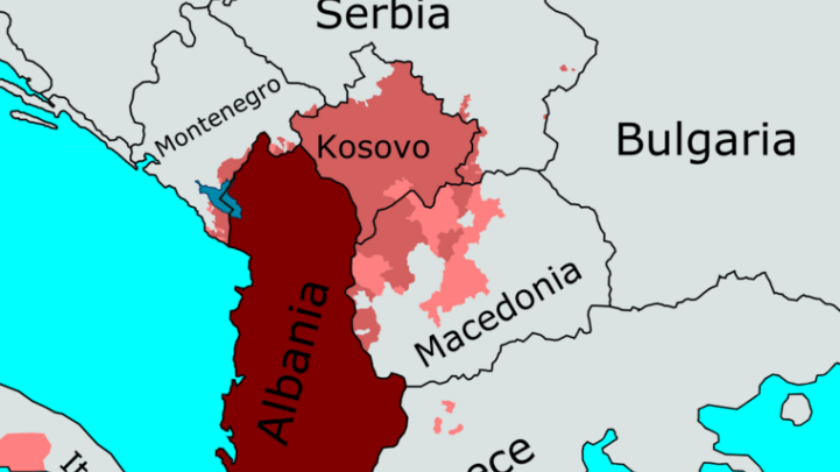 Clear indications have been made that there is a project for a Greater Albania and it is progressing ahead, especially as the world’s attention is focussed on and distracted by the coronavirus, Libya and Syria’s Idlib province. The ultimate goal of Albania was to absorb Kosovo and the Preševo Valley in Serbia, southern Montenegro, Epirus in Greece and western North Macedonia into a single Greater Albania state.

Although this may not be official policy of the Albanian Republic, it is ingrained into the Albanian mythos. However, this has now changed with the Kosovo-born Albanian Minister-in-office for Europe and Foreign Affairs Gent Cakaj and the Foreign Minister of Kosovo Glauk Konjufcameeting yesterday to discuss the establishment of common economic space for free movement of people, goods and capital between Albania and Kosovo, as well as sharing embassies around the world which so far only exists in the Australian capital of Canberra.

Cakaj said on Twitter about “the need to deepen cooperation between [Albania and Kosovo] and strongly support the coalition of Albanian political parties in [Serbia’s] Preshevo [Preševo] Valley” to the east of Kosovo. Although the tweet just emphasizes deeper cooperation between Albania, Kosovo and the Preševo valley, it was his comments to Turkey’s Anadolu Agency that gives the biggest suggestion of a Greater Albania project being put into action. Cakaj said to the agency that:

“the borders between the Republic of Kosovo and the Republic of Albania should not exist at all, they should be removed immediately and our countries should enjoy unrestricted freedom of movement and unhindered ability to deepen economic cooperation.”

Although it may seem like that Albania and Kosovo are making strong efforts for the Greater Albania project, it rather demonstrates their desperation as Kosovo continues to lose legitimacy and countries withdraw their recognition of the quasi-independent state that illegally broke off from Serbia in 2008. A total of 14 countries since 2017 have withdrawn their recognition of Kosovo, meaning only 51% of United Nations members now recognize it. The usual norm in statehood recognition is that more and more countries overtime recognize the state, not withdraw recognition. If we look at the Israeli situation, since its founding in 1948, only five states have withdrawn recognition and 162 of the 193 United Nations member states recognize it. It is inevitable that with incentives from China and Russia more states will withdraw their recognition of Kosovo.

This brings a new question then. Has the failings of Kosovo actually accelerated the Greater Albania project?

The proposal by Finnish Nobel “Peace” Prize winning Marti Ahtisaari to establish an independent Kosovo and Kosovan identity has been an abject failure. Rather, Kosovo has taken on the Albanian identity openly with KosovoPrime Minister Albin Kurti, who is currently serving as the fourth Prime Minister of Kosovo since February 3 2020, not differentiating between nation and ethnicity as he sees Kosovo as an extension of Albania, despite the nation and the state not being the same. Kurti also does not recognize the flag and anthem of Kosovo, as well as the Kosovar identity.

As Kosovo continues to lose legitimacy, meaning the breakaway province could return back to Serbian administration, it is attempting to avoid this situation by merging Kosovo into Albania. It is for this reason that Cakaj says the borders between Albania and Kosovo should not exist at all and that they should both share embassies. As Serbia’s position has strengthened, Albania’s official support for Kosovo is an attempt to parry it and jointly formulate a strategy to achieve some success.

The broader goals of merging Albania and Kosovo are multiple – to confirm Kosovo’s independence from Serbia; to propagate the Greater Albania project; and to put pressure on Serbia as well as international states to challenge Belgrade’s foreign policy successes. The campaign cooperation between Albania and Kosovo demonstrates the attempts to raise the issue to a higher level and the desire to establish new mechanisms and measures, with the incumbent government in Pristina to implement a practical policy because all tactics so far have not yielded results and giving up is not an option.

Therefore, there is no reason why Serbia should give up its current policy of pushing states to withdraw their Kosovo independence recognition. Belgrade must maintain that Kosovo is an integral and historical part of Serbia. Belgrade’s efforts have produced results and the Serbian public demand results. Serbia should not accept any blackmail and demands from Kosovo or Albania, especially as it continues its project of reintegrating Kosovo. Only days ago, it was announced that rail links between Belgrade and Pristina will be constructed, something that does not even exist between Kosovo and Albania. Although Kosovo’s failings continue, it has also accelerated the Greater Albania project in an effort to prevent the reintegration of the breakaway province back into Serbia.

The “black sun” is shining in Ukraine