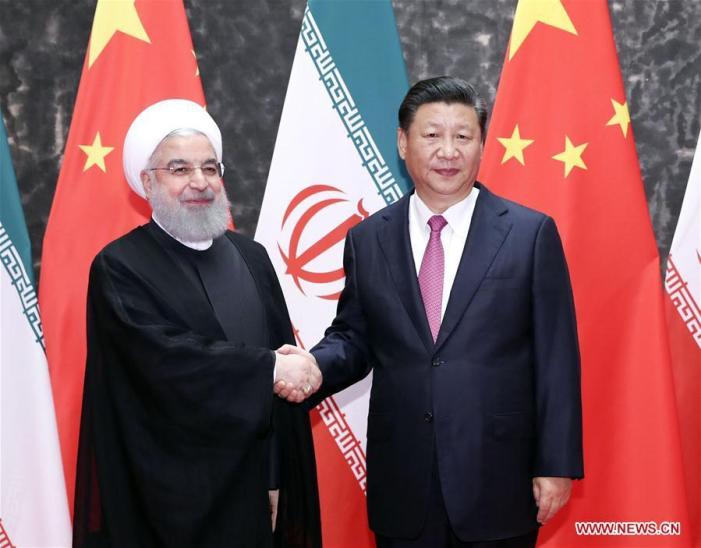 he relationship between China and Iran has been in the spotlight recently. A huge, 25-year deal is reportedly being considered that would see $400 billion of Chinese investment in Iranian energy and transport infrastructure. The deal is the latest effort by Beijing to expand from a regional hegemon into a global power through the Belt and Road Initiative (BRI) which aims to reshape regional economic topographies in its favour.

Beijing has ostensibly undertaken to make such a massive investment in key sectors of Iran’s economy in return for an assured supply of Iranian fuel for the next 25 years. The proposed investment is the biggest China has ever pledged to any country as a part of the BRI and envisages huge expenditure in building Iran’s oil and gas and infrastructure, at $280bn and $120bn respectivel

According to the information available, China is to spend $120bn to develop Iran’s transport network starting with the 2,300 kilometre road that will connect Tehran to Urumqi in Xinjiang Province. This route will be paved with the Urumqi-Gwadar connection built under the “New Silk Road” in the China Pakistan Economic Corridor.

When completed, the road link will have an ambitious plan to connect with Kazakhstan, Kyrgyzstan, Uzbekistan and Turkmenistan, and thereafter via Turkey into Europe.

Beijing also plans to deploy over 5,000 Chinese security personnel to protect its investments in Iran. It is among the top three arms suppliers to the Iranians, according to SIPRI data, exporting weapons worth about $270 million to Tehran between 2008 and 2018.

The first trilateral naval exercise between China, Russia and Iran was held in the Gulf of Oman in December last year. Strategically, all three nations are empowered by the common perception of an enemy in Washington and fears of US military interventionism.

Iran seeks to expand its military influence in the region by obtaining Chinese weapons and expertise, while China seeks to develop Iran as a lucrative arms market and a strategic bulwark against US forces in Asia.

The top economic advisor to Iran’s Supreme Leader Ayatollah Ali Khamenei is Ali Agha Mohammadi who appeared recently on state television to address the need for a financial helping hand.

He said that to remain a player in the energy sector, Tehran needs to boost its oil output to at least 8.5 million barrels per day, and for that it needs China. As Iran’s biggest trading partner, China overtook the European Union in 2010, with about one-third of Tehran’s overall international trade being conducted with Beijing.

Iran’s oil industry was more dependent on China as a trading partner, despite sanctions implemented by the US and the UN in 2010. Only 5 percent of Iran’s overall oil exports went to China in 2000; however, by 2011 that had increased to 25 percent.

China has also become a major investor in Iran’s oil and gas industry, as the US and international sanctions have limited Tehran’s access to international finance and the innovations needed to develop its declining energy industry. In 2012, at the height of restrictive economic sanctions, China imported 54 percent of Iran’s oil output by alternative financial structures, including barter.

There are plenty of motives for China and Iran to collaborate as their economies are complementary.

China is the world’s largest oil importer, and Iran wants clients ready to counter US sanctions. Moreover, Iran needs modernized technology in areas such as rail and 5G networks, where Chinese companies have strengths.

Tehran has increasingly turned to Beijing for support in its long-running conflict with the US. China has also been vocal in its support for the 2015 Iran nuclear deal, vowing to uphold it even after Washington withdrew from the pact.

Iran is situated at the crucial nexus of the Middle East, Central Asia and South Asia, as well as the critical trading networks that run through the region. Beijing has identified Iran as a link along the BRI, connecting Xinjiang with the Middle East.

Relations between Beijing and Tehran, which date back to Iranian President Mahmoud Ahmadinejad’s “Pivot to the East“ policy, have blossomed under Chinese President Xi Jinping, who is pushing China’s ambitious initiative.

The alliance developed over four decades across three phases: military cooperation during the 1980/88 Iran-Iraq War; energy cooperation in the 1990s as China developed quickly; and oil deals which defied sanctions. The “maximum pressure” policy and sanctions imposed on Iran by the Donald Trump administration has failed.

Far from isolating Tehran, as intended, the exertion of significant economic pressure on the Iranian regime has pushed it further into the arms of Beijing. China is criticized by Western policy observers for its so-called “debt diplomacy”, the strategy of indebtedness through aggressive investment packages to an economically vulnerable country.

This acts as leverage for important property acquisitions; one of the most prominent examples is the Hambantota Port in Sri Lanka, which the government had to lease to China for 99 years after it struggled to repay Chinese loans.

Beijing is utilizing Tehran’s rising vulnerability intensified by the health and economic crises due to Covid-19. The latest cyber-attacks on its atomic and maritime facilities have also driven Tehran into the arms of China.

After all, the growing superpower provides an insatiable energy demand, military and industrial infrastructure, huge spending and a possible global diplomatic shield, with its veto at the UN Security Council.

All are needed desperately by Iran. The agreement is not only seen by both nations as mutually advantageous, but also as a possible tool to challenge US hegemony in the Middle East.

China sees seamless possibilities in its strategic partnership with Iran, with a low-cost supply of oil, abundant mineral resources and an untapped market. Beijing’s Iran strategy is affected by its increasing footprint in the Persian Gulf, where it cautiously develops a position centred on highly diverse ties with regional powers, along with its global confrontation with the US.

The State Department in Washington has already threatened to target Chinese companies if they make investments in Iran which defy US sanctions.

Nevertheless, China is already in a trade and technological war with the US and seems determined to go ahead with its partnership with Iran. Beijing continued to buy Iranian oil over the past year even after the US sanctions’ waivers expired in May 2019, albeit in smaller volume.

With the US swamped by exhausting wars in the Middle East in recent years, China has steadily increased its political, commercial and even military operations in the region.

Its motives are clear, though varied; it aims to promote its goals, such as a growing need for oil supplies and destinations for surplus labour and capital.

China is mindful that none of the major powers returned unscathed from wars in the Middle East and are confronting a very challenging variety of obstacles.

The broad political fissures in the region render it impossible for outsiders not to take sides in the numerous conflicts. This presents a challenge to China, which seeks to be a partner for everyone, Iran, Israel and Arab states alike, in order to reap the advantages of its global involvement.

Even if just a portion of what is envisaged under the planned Sino-Iranian deal comes to life, it presents a deadly threat to the campaign against Tehran by the Trump administration.

China’s investments in Iran allow it to exert its influence on Iranian foreign policy, and will enable China to do three things: allow China to diversify its energy needs without overly relying on Russian energy; elevate its claim to offer an alternative to the “Washington consensus” by defying US sanctions against Iran and continuing to trade with Tehran; allow China to control India’s access to Central Asia by enhancing Beijing’s relationship with Iran.

‘The country that bombed you is your friend…