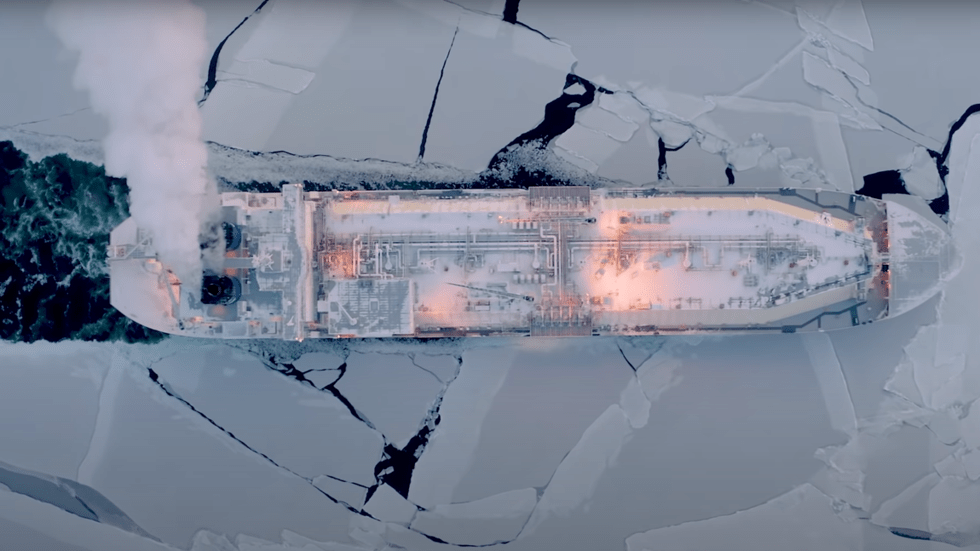 Following a nuclear-powered icebreaker, a Russian tanker has sailed through the frigid Northern Sea Route for the first time ever in February. “Won’t somebody think of the poor ice?”, climate-conscious commenters shouted.

The Christophe de Margerie, a liquefied natural gas tanker operated by Russian shipping firm Sovcomflot, made history this week when it docked at the remote Arctic terminal of Sabetta, after sailing through the normally ice-locked Northern Sea Route (NSR) from Jiangsu in China. Traveling solo through the Bering Strait, it then followed a nuclear icebreaker, the 50 Let Pobedy, along Russia’s northern coast until it reached Sabetta on Friday.

The journey marked the first time a tanker has sailed the route in February, “and confirms that year-round safe navigation is possible along the entire length of the Northern Sea Route,” Sovcomflot CEO Igor Tonkovidov said during a meeting with Russian officials last week. Russian Deputy Prime Minister Yury Trutnev predicted that year-round shipping along the route could more than double by 2024.

However, some observers took issue with the idea of a Russian ship “literally breaking apart ice to move gas.” Even though ice-breaking ships have been used in polar regions since as early as the 11th century, the climate crowd still sounded the alarm.

Concerns about the planet notwithstanding, geopolitical tensions look set to heat up long before the ice disappears. As the Christophe de Margerie left Jiangsu in late January, more than 1,000 US Marines landed in Scandinavia for Arctic warfare training. Several weeks earlier, then-US Navy Secretary Kenneth Braithwaite said the American sailors would increasingly be making their presence known. “You will see the navy operating again in a more permanent manner above the Arctic Circle,” he said, adding that the US will “operate more assertively” to challenge Russia’s claims in the region.

War games in the Arctic