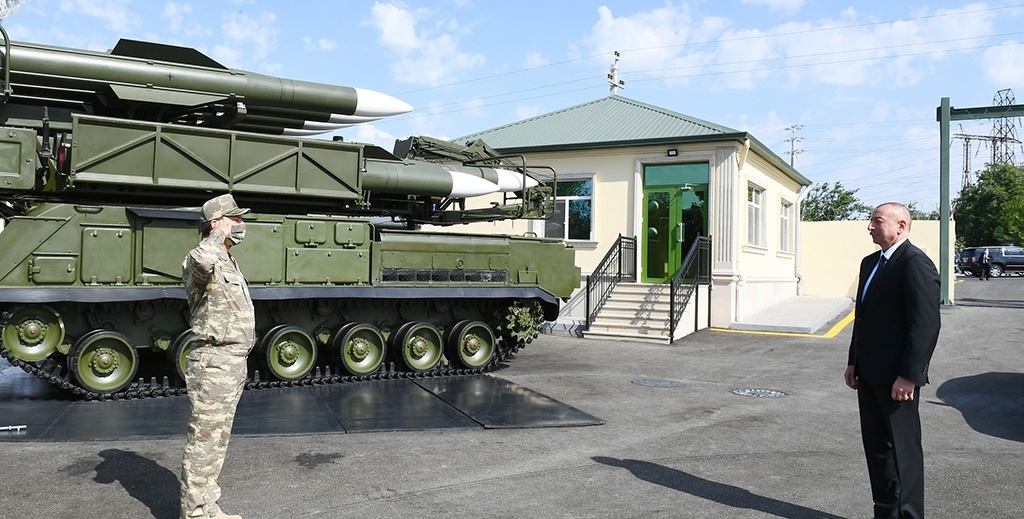 In the middle of the country’s victorious war against Armenia, the chief of staff of the armed forces – long the subject of public rumors of “treason” – disappeared. He hasn’t been seen since.

Najmaddin Sadikov had been Azerbaijan’s top military officer since 1993, the chief of general staff of the armed forces and a deputy defense minister. But in the middle of last year’s war with Armenia, on the cusp of the victory for which the armed forces had prepared nearly all those 27 years, Sadikov mysteriously disappeared.

Rumors had long swirled around Sadikov, a career Soviet army officer who joined the Azerbaijani armed forces in 1992 during the first war with Armenia. Many Azerbaijanis considered him a “traitor,” a word they often used in social media posts about him. Insinuations were made about his ties with Russia and claims that his brother was a senior officer in the Armenian armed forces.

The rumors reached a peak during fighting in July, when a well-known and respected senior officer, Major General Polad Hashimov, along with Colonel Ilgar Mirzayev, were killed. On social media, many Azerbaijanis accused Sadikov of giving their coordinates to Armenia.

Sadikov attended the funeral, acting as a pallbearer along with Defense Minister Zakir Hasanov.

But at a massive demonstration in Baku that followed the funeral of another fallen officer, protesters blamed Sadikov for the deaths and called on him to resign. Rumors spread that he had been fired.

The allegations of treason appear ungrounded, but the government seems to have been worried by the harsh public reaction to Hashimov’s death and the heightened accusations against Sadikov, said Fuad Shahbaz, a Baku-based political and military analyst.

“The harsh criticism of Sadikov during the mass demonstrations in July and the demands for his resignation gave the government serious doubts about Sadikov’s image,” Shahbaz told Eurasianet. “This is likely the reason for his dismissal.”

Sadikov still retained official support, however. In response to the many public insinuations about him, several articles in pro-government media appeared, chronicling his successful career and blaming rumormongers for slandering him.

The Ministry of Defense issued a statement on July 21 denying the rumors that he had been fired and that his brother was in the Armenian armed forces; the ministry said the brother had been dead for more than 30 years.

“These reports are fabrications and disinformation spread by enemy forces for provocative purposes,” the ministry said. “Unfortunately, the recent spread and discussion of news on social networks clearly shows that this is done in order to create bias, hostility and confusion in society.”

Sadikov’s family also was mixing with the Azerbaijani elite: Azerbaijani-Russian pop star Emin Agalarov, the former son-in-law of President Ilham Aliyev and friend of former U.S. President Donald Trump, released a song in September on Instagram called “Fatima,” which many fans took as an announcement that he was marrying Sadikov’s daughter, Fatima Sadikova. Agalarov has been coy and not confirmed directly that he is marrying Sadikova, but continued to drop hints that he was.

About two weeks after “Fatima” was released, war broke out again with Armenia.

When Azerbaijan appeared to suffer significant early losses in the fighting, especially around Murovdag in the Kelbajar region, many Azerbaijanis again blamed Sadikov. Rumors again spread that he had been fired for treason.

On October 4, the Ministry of Defense published a photo showing a video teleconference among senior military leaders, including Sadikov.

A few days later, though, Sadikov’s biography and other information was quietly deleted from the MoD’s web page. There was no official comment, though the erasure was noticed and widely commented on in social networks.

At the same time, Aliyev quietly signed two decrees to dismiss Sadikov’s nephew, Ramil Asgarov, another senior military official. In June, Aliyev had promoted Asgarov to major general. But then in two late October decrees, Aliyev first dismissed Asgarov from his position as chief of the Main Department of Special Security of the Ministry of Defense and then four days later dismissed him from active duty. Neither decision was publicly announced and the decrees passed unnoticed.

Azerbaijan went on to win the war, and on December 10 held a military parade in Baku to celebrate. Sadikov, who hadn’t been seen since that October 4 photo, didn’t appear at the parade.

Social media speculation again spiked. One Facebook user, under a post captioned “What do you think of Najmaddin Sadikov?” commented: “Why has he not been punished before the people? Why has whatever he has done not been investigated? Why is there no news?” Others returned to Agalarov’s Instagram post and accused the pop star of marrying the daughter of a traitor.

Finally, on January 28, there was official news, of a sort. The Defense Ministry, in response to a query from state news agency APA, confirmed that Sadikov was no longer in military service. APA reported, without citing a source, that he was suffering serious health problems and was undergoing open heart surgery in Moscow.

But other government officials began to say a bit more.

One member of parliament, writer Agil Abbas, wrote a short humor piece about Sadikov headlined “Najmaddin Sadigov Has Become a State Secret,” which concluded with a pointed retelling of an old Soviet joke. “So, a journalist wrote about a very high-ranking government official who was a fool. The journalist was sued. The judge sentenced him to a very high sentence – 15 years. Not because he insulted that high-ranking government official, but because he revealed an important state secret.”

Abbas gave a more serious interview to a local news website, Yenicag, where he said he believed that Sadikov was under house arrest. “He made mistakes, or lost credibility, in my opinion, that’s why he was removed,” Abbas said. “If he was arrested, it would be published in the press. Because the arrest of a general could not be hidden. He is probably under house arrest in his house, or one of his villas.”

A former state prosecutor, Ferman Rzayev, said in an online video show that Sadikov was responsible for early losses in the war.

“Who created the tactics? Of course, Chief of General Staff Najmaddin Sadikov,” Rzayev said. “Najmaddin trapped our army, directed the attack to the right, towards Agdam. For 30 years, Armenians have built tunnels, fortifications and traps there. Najmaddin had a plan to attack the direction in which the Armenians were strongest.”

Rzayev also had implicated the current minister of defense, Zakir Hasanov. A few days later, the defense ministry responded to Rzayev’s report directly defending Hasanov, but also Sadikov, albeit indirectly. It noted that Hasanov was commanding troops in the operation led by the Supreme Commander-in-Chief, i.e. Aliyev.

“We once again call on the media, as well as electronic media, to refrain from circulating unfounded, untrue and unofficial information.” the MoD said.

Detailed official information, however, is not likely to be forthcoming.

“The state wants a quiet solution to this and for people to forget about it,” Shahbaz said.

Erdogan sees China as a partner for the future

Afghanistan – a unique chance for a military alliance between Russia & China