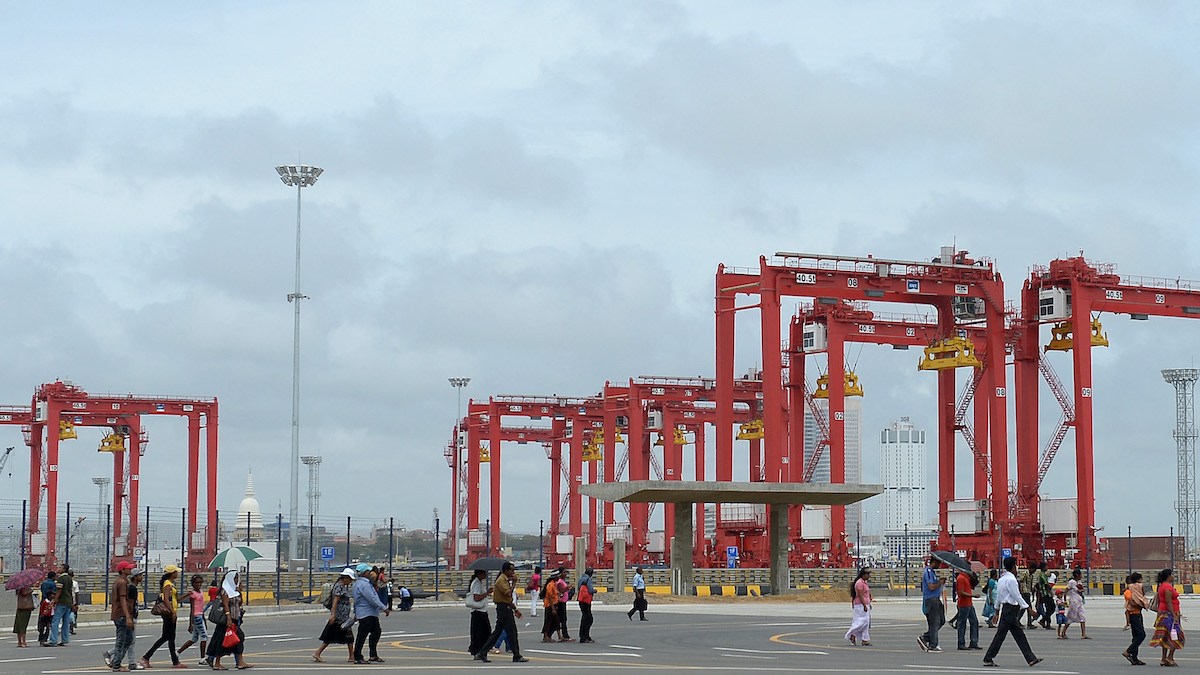 Local visitors walk on the premises of Sri Lankaís latest mega port, the Chinese-built Colombo International Container Terminal (CICT), in Colombo on August 13, 2013, a week following its commissioning. Sri Lanka is aiming to be South Asia main shipping hub by investing billions of dollars in port infrastructure, much of it with Chinese help. AFP PHOTO/LAKRUWAN WANNIARACHCHI (Photo by LAKRUWAN WANNIARACHCHI / AFP)

In a stunning coincidence, a mere two weeks ahead of Indian Prime Minister Narendra Modi’s planned visit to neighboring Bangladesh, the Sri Lankan government on Monday issued a Letter of Intent to India’s Adani Ports and Special Economic Zones Ltd (APSEZ) to develop and operate the West Container Terminal (WCT) in Colombo.

Sri Lanka’s Rajapaksa clan-led government took a calculated risk. If New Delhi were in Colombo’s shoes, it probably would have waited for another week. To make up its mind before formalizing the audacious decision to invite a big Indian presence. Right at the epicenter of the Sri Lankan dream to be “another Singapore.”

For, in another week, Colombo would know which way the Indians actually voted in Geneva when the crunch time came on the US-sponsored resolution at the UN Human Rights Council regarding the alleged war crimes committed during the last brutally violent phase of the struggle to vanquish the rebel Liberation Tigers of Tamil Eelam (LTTE).

Colombo has drawn New Delhi into a ring of long-term engagement that will be difficult to shake off easily. Indian high commissioner to Colombo has reportedly been touring the eastern and northern provinces of Sri Lanka to explain to the Tamil parties what is on the anvil in Geneva.

What brilliant geopolitical “outsourcing!” Colombo expects that New Delhi will discourage Washington from undermining the stability of the island nation’s government. And to stop threatening to dispatch President Gotabaya Rajapaksa to The Hague. To meet the same tragic fate as Slobodan Milošević, the last president of the former Yugoslavia. Before it was carved up by the North Atlantic Treaty Organization (NATO) like a turkey on Thanksgiving Day.

The WCT project envisages that APSEZ will partner with John Keells Holdings PLC. It is Sri Lanka’s largest diversified conglomerate, and the Sri Lanka Ports Authority as a part of the consortium with a 51% majority shareholding. It will be developed on a build, operate and transfer (BOT) basis for a period of 35 years as a public-private partnership.

The WCT will have a quay length of 1,400 meters and alongside depth of 20 meters. Thereby making it a prime transshipment cargo destination to handle ultra-large container ships. The project cost is estimated at US$750 million as of now, which may rise.

The WCT will become the single biggest economic project ever executed by an Indian company in the country’s immediate neighborhood.

The huge significance of the WCT for the region’s economy cannot be minimized. An APSEZ statement highlighted that the project is expected to boost the WCT’s container handling capacity. And to further consolidate Sri Lanka’s locational advantage as one of the world’s top strategic nodes along the busiest global transshipment route.

The Port of Colombo is already the most preferred regional hub for transshipment of Indian containers and mainline ship operators. 45% of Colombo’s transshipment volumes is either originating from or destined to an Adani-run port terminal in India.

Simply put, the Sri Lankan government is intertwining its economic prosperity with India’s massive market in an inseparable way. This takes the breath away. Particularly considering that it was only five years ago that New Delhi allegedly became messed up with an Anglo-American project to overthrow the established government in Colombo. It was, ironically, headed by the same leadership as today.

India had teamed up with its Quad partner Japan originally to bid (unsuccessfully) for the East Container Terminal project at Colombo Port. There was much-suppressed fury when the Sri Lankan government spurned the offer. Indian strategic analysts thereupon went overboard with the stupid hypothesis that Colombo had buckled under “Chinese pressure.”

But now, the WCT, a much bigger BOT project, has been offered to India on a platter with no strings attached. Colombo seems to prefer that the Indians shake off their Quad ally and undertake the WCT on its own steam.

India is de facto becoming a stakeholder in the political stability of Sri Lanka. The bittersweet lesson of 2015 is that securing an easier, cost-effective, risk-free, predictable and durable outcome is possible with a pragmatic outlook and strategic patience.

No one in Delhi talks any more about the “China factor.” The paradox is that the WCT project will be adjacent to the massive Colombo Port project that Chinese companies are funding and executing.

Yet, apparently, there is no heartburn in Beijing either that the Adani Group is moving in as next-door neighbor.

Arguably, Beijing knew about the WCT project, which has been under discussion for a while. But in its ingenuity and wisdom, Beijing assessed that it is just as well if India’s paranoia about China’s presence in Sri Lanka is set at rest.

The WCT saga is unfolding just before Prime Minister Modi’s visit to Bangladesh planned for March 26-27. Bangladesh is another example where it emerges that India doesn’t need to carry a Quad visiting card to build a partnership. The Sri Lankan experience nonetheless has great relevance to Bangladesh.

According to a new World Bank report titled “Connecting to Thrive: Challenges and Opportunities of Transport Integration in Eastern South Asia,” seamless transport connectivity between India and Bangladesh has the potential to increase national income by as much as 17% in Bangladesh and 8% in India.

The report says a 297% increase in Bangladesh’s exports to India and a 172% increase in India’s exports to Bangladesh. It could be within reach if only transport connectivity improves between the two countries and they were to sign a free-trade agreement.

From the perspective of diplomacy and foreign policy, the bottom line is that the Indian strategic community should remain self-assured that the political elites in the SAARC (South Asian Association for Regional Cooperation) capitals surrounding India are not only nobody’s puppets but have always regarded New Delhi as their most important partner.

That, in turn, puts the onus on India to act with maturity and a sense of responsibility and decorum.

Only with such a comfort level can India eschew its paranoia about the Chinese presence. It can instead focus single-mindedly on the pursuit of its business interests optimally in regional capitals. Ideally, leave it to the Adani Group to reset the India-Sri Lanka relationship and put it on a realistic, pragmatic footing.

As for the strategists and think-tankers in Delhi, do not suspend rational thinking after reading the garbage disseminated by US propaganda outfits from time to time expanding on the Central Intelligence Agency’s decade-old hypothesis about a Chinese “string of pearls” around India’s delicate neck.

This article was produced in partnership by Indian Punchline and Globetrotter.

For India Emperor has no clothes