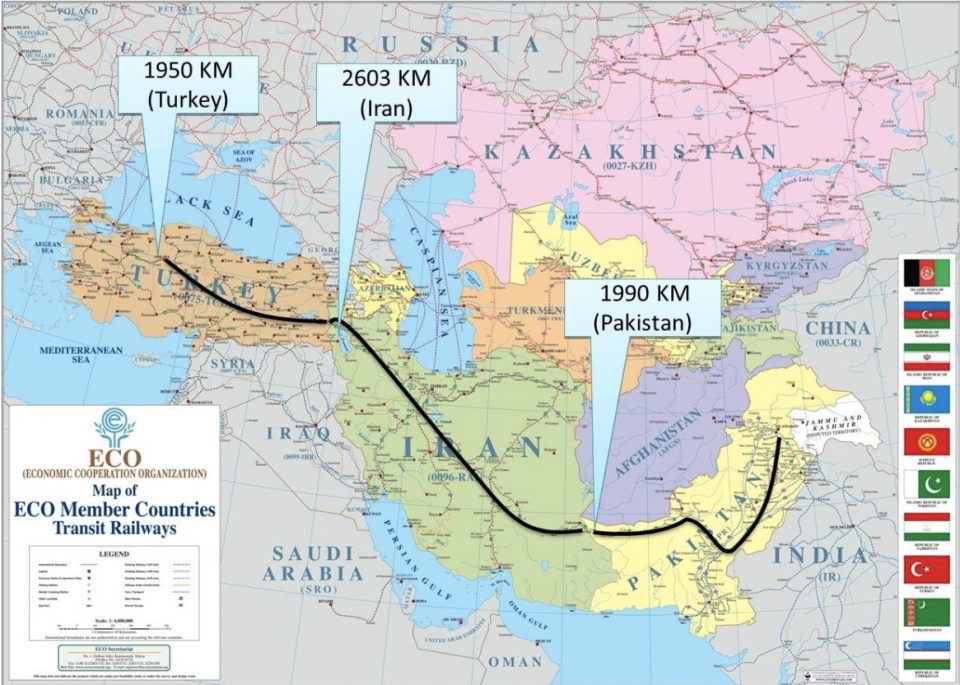 The railway will go directly to Baku, Tehran and Islamabad

The ambitious project of the Turkish authorities can revive business activity in almost the entire Turkic region.

It is not the first time that Turkey has been demonstrating its intentions to seize absolute leadership in its region. After the end of the Karabakh conflict in favor of Azerbaijan, the integration of economies may become even closer.

One of the points of the peace agreement assumes that Armenia will allocate a strip of its territory in the south for the construction of a railway line between Nakhichevan (an Azerbaijani exclave in Armenia) and the main territory of Azerbaijan. For Turkey, this may be a chance to establish direct rail links with Azerbaijan. In particular, with the capital of the republic, Baku.

The fact is that back in 1993 the direct road through Armenia was closed. The new Baku-Tbilisi-Kars branch was completed in 2017. In fact, a section of about 100 kilometers was completed. It was planned to run passenger trains on it in 2020.

Now Kars can be connected to Baku via a new branch – Turkey directly borders on Nakhichevan (the border is about 11 kilometers). The construction of the 230-kilometer road Kars – Igdir – Nakhichevan will begin this year. It will cost 2 billion Turkish lira. In fact, Turkey will receive a faster railway route with Azerbaijan, and without entering the territory of other countries (as in the case of a branch through Tbilisi). For this, Azerbaijan must build a road from Nakhichevan to its main territory.

The Turkish authorities are already close to launching a larger railway route. Trains are expected to start soon from Istanbul via Tehran to Islamabad. It is planned to connect the capital of Turkey with the “rising star of Asia” Pakistan via a 6443-kilometer railway. Of these, 1,850 kilometers will pass through the territory of Turkey, 2,603 ​​kilometers through Iran and 1,900 kilometers through Pakistan.

Due to the fact that in Iranian Zahedan it will be necessary to reload cargo (change of track gauge), the whole journey will take about 14 days. However, this is much faster than the existing sea route from Istanbul to Islamabad. That takes an average of 21 days. The acceleration of the route by a week will increase the volume of trade between the countries. Road connection with Nakhichevan will contribute to the economic growth of the republic.

The Istanbul-Tehran-Islamabad, or ITI corridor, was launched in 2009 within the Economic Cooperation Organization (ECO) framework, an Asian political and economic intergovernmental organisation. Various test journeys were carried out, but it has not become a stable regular service since then. A year ago, rumours concerning the service’s re-operation made the news, but they remained a theory.

Earlier this year, Turkey, Iran and Pakistan initiated discussions aiming to start anew and finally launch the long-awaited service. The three countries did not specify the time frame for the outset of operations, and they implied that this would happen at some point during 2021. However, it seems that approximately a month later, the trilateral coalition is ready to realise what it has been visioning for ten years now.

Part of the New Silk Road

Pakistan wants to connect the ITI corridor with China’s Belt and Road network through its ML-1 railway line. It is the largest component of the China-Pakistan economic corridor (CPEC). Despite the potential, the realisation of this project still faces some infrastructural and financial hurdles.

The ML-1 railway project was still unfinished when discussions concerning the route restarted. Without it, running trains through the Balochistan Province in Pakistan is impossible. Infrastructure in this region cannot handle the same trains as in Turkey and Iran. Tracks are over a century old, and natural conditions do not make the situation easier since sand dunes cover them in many parts. The finalisation of the ML-1 project was critical to connect ITI with BRI since it seemed to be the prerequisite for the re-opening of the line.

Does Azerbaijan, together with Turkey, “eat” Georgia?