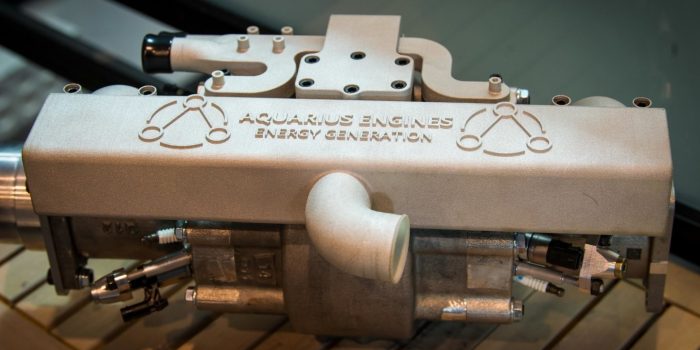 Tiny single-piston hydrogen engine reverts the power back to the old-fashioned combustion engines.

Aquarius, the company behind the build based in Israel unveiled the tiny hydrogen engine and hopes that it can replace gas engine generators and hydrogen fuel cells in the future models of electric vehicles.

The engine weighs only 10 kg and a single moving piston aids it in developing power. The purpose behind the small build is to power an off-grid micro-generator.

“It was always our dream at Aquarius Engines to breathe oxygen into hydrogen technology as the fuel of the future. From initial tests, it appears that our hydrogen engine, that doesn’t require costly hydrogen fuel-cells, could be the affordable, green and sustainable answer to the challenges faced by global transport and remote energy production.”

Despite being lightweight and small, the Aquarius engine design is straightforward and low maintenance. All-in-all it contains a total of 20 parts out of which the only moveable one is the piston. Amazingly, the small engine comes excluding the biggest of the concern relating to the engine and its performance, the engine oil, as per the company behind its build it does not requires any lubrication to perform.

The fossil fuel engines developed by Aquarius are undergoing initial testing in the field in North America, Europe, and Asia. In collaboration with Nokia, the company has completed its phase-one testing. Nokia foresees installing these micro-generators at communication towers in far-off places. A software also built by Aquarius would aid in monitoring the output and efficiency of the generators from the control rooms back in more developed areas.

Phase two testing would include Nokia testing these small generators at pilot sites in Australia, New Zealand, Germany, and Singapore.

The video below shows how its parts come together to form the whole of the mini engine.