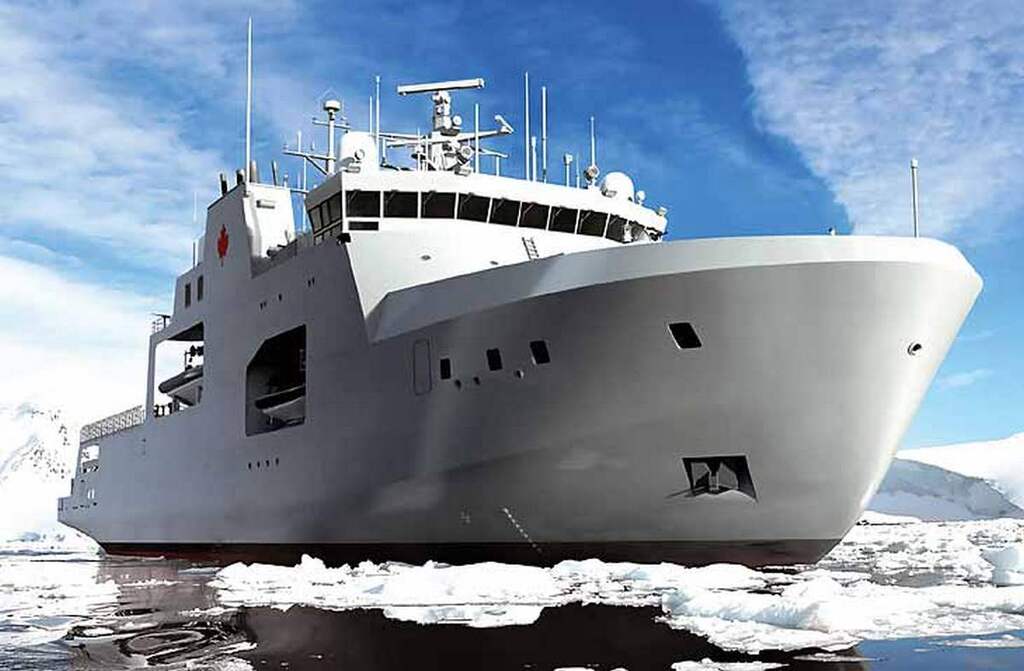 The first combat icebreaker was put into service

Against the background of the intensification of the Russian Northern Fleet in the high Arctic latitudes, for example, in recent years, Russian ships conducted training voyages along the Northern Sea Route to the New Siberian Islands, the Royal Canadian Navy adopted the first Arctic patrol ship Harry Devolph. It was laid down in 2016, launched in 2018, and on June 26, 2021 in Halifax. the adoption ceremony took place. As early as August this year, “Harry Devolph” will travel north to participate in the annual Arctic exercise.

In addition to the lead ship – “Harry Devolf”, it is planned to build five more icebreakers of this class. The purchase contract between the Canadian Department of Defense and the Canadian shipbuilding company Irving Shipbuilding was signed in 2015. The total value of the contract is CAD 4.3 billion. The net purchase share is estimated at CAD 2.3 billion. The remaining amount is intended for the maintenance of the ships for a period of 25 years. Given the harsh operating conditions in the Arctic, the Canadian Navy believes that in 25 years the ships will be decommissioned. It was planned to build two ships every year. The new warships are specifically designed to patrol Canada’s northernmost regions and sea waters. It is planned that they will also strengthen the country’s position in the Arctic.

“Harry Devolph” with a displacement of 6.6 thousand tons has a length of 103.6 m. The ship is driven by a diesel-electric system of four generators with a capacity of 3.6 MW and two diesel engines with a capacity of 6 thousand hp. On free water, the ship develops a speed of up to 17 knots. When breaking one meter thick ice – up to 3 knots. The standard crew of the “Harry Devolf” is 65 people. Up to 22 people can be additionally taken on board.

According to Western experts, the design of the “Harry Devolf” is very similar to the Norwegian coast guard ship “Svalbard” (KV “Svalbard”), so, for example, their basic dimensions practically coincide. The design of the ship takes into account the peculiarities of operations in the Arctic region. There is a closed tank to protect equipment and personnel from the extreme weather conditions of the arctic climate. The payload is located aft, where you can install up to six 20-foot ISO containers, unmanned underwater vehicles, a 12-meter landing boat, as well as weapons and equipment for the landing units.

A crane installed at the stern with a lifting capacity of up to 20 tons allows the ship to unload not only in equipped ports, which is of significant importance in the Arctic. The separate interior vehicle deck can be loaded with off-road vehicles, light trucks and snowmobiles. A CH-148 helicopter can be accommodated in the stern hangar. The helicopter will be used for naval reconnaissance, anti-submarine combat (equipped with two torpedoes) and search and rescue operations. Armed with a Harry Devolph 25mm Mark 38 artillery mount and two M2 heavy machine guns.

Similar Russian ice-class patrol ships are still under construction. Although the contract for the construction until 2020 of the first two ships of Project 23550 (code “Arctic”) was signed between the Russian Ministry of Defense and JSC “Admiralty Shipyards” on May 4, 2016, but the lead ship of the series – “Ivan Papanin” was launched only October 25, 2019 and now stands at the outfitting wall. The transfer to the fleet is scheduled for late 2023.

Also on board the ship will be based two high-speed patrol combat boats of the project 03160 “Raptor”. They are designed to pursue and detain violators of the sea borders of the state border and boarding operations. And in the deck hangar – a Ka-27 helicopter and a UAV.

Aurus Is Russia’s Answer To Rolls-Royce