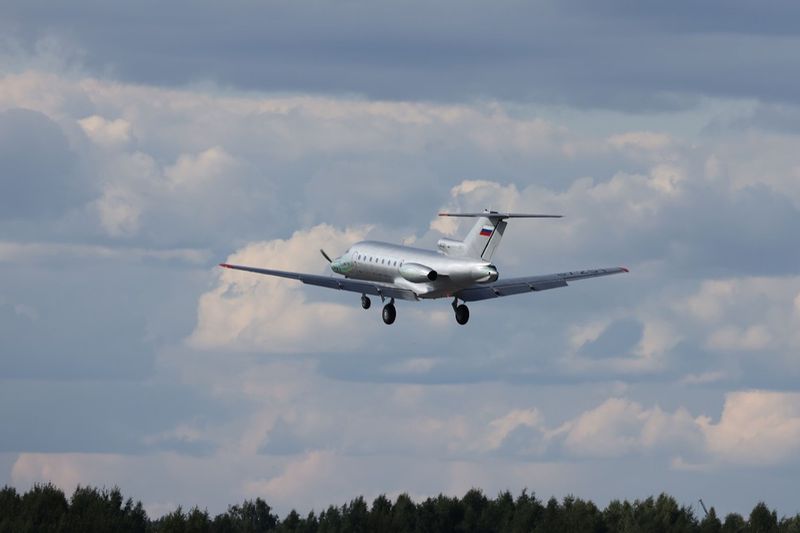 It became a world premiere: the first Russian “electric aircraft” – the Yak-40LL flying laboratory with a demonstrator of hybrid power plant (GSU) technologies flew to MAKS-2021. The flying laboratory flew off perfectly

Experts note the clear coherence of the joint work of the aircraft systems and the GSU, which includes the world’s first superconducting electric aircraft engine. It complements the aircraft’s two turbojet engines. The use of high-temperature superconductivity technologies in the future will significantly reduce the weight and dimensions of electrical machines and increase the efficiency. This is critically important for aviation: flying is always a struggle with weight. And here we are ahead of the world by 2-3 years, because no one has yet demonstrated such an approach and such technologies have not been shown.

A 500 kW superconducting electric motor rotating the propeller is located in the bow of the Yak-40LL. There is also a liquid nitrogen cryogenic cooling system. The electric motor is powered by an electric generator rotated by a turboshaft gas turbine engine, it is installed in the tail section, and a battery pack. You take off on an electric motor, wherever possible, you start the gas turbine engine, recharge the battery at the permitted altitude, continue the flight again on electricity and sit down on the propellers.

Prior to the start of flight tests, the unique motor and its components were bench tested at CIAM. Then the GSU was installed on the Yak-40 aircraft, on the basis of which a flying laboratory was created at SibNIA. After confirming the stable joint operation of the electric motor and all aircraft systems during the ground test complex, the Yak-40LL moved to the flight test stage.

According to scientists, they hope to receive the entire set of technologies by 2026-2027, which will make it possible to create a regional aircraft on such a hybrid scheme by 2030. But we intend to go even further, namely, to use not nitrogen as a coolant in the engine, but liquefied hydrogen, which will also be fuel. It actually gives no emissions at all. This will be an even more complex scheme – for large aircraft, for long-range aviation. However, this is already the prospect of 2035 and beyond.

GSU “electrolyte” was developed by the Central Institute of Aviation Motors named after P.I. Baranova (CIAM, part of the Research Center “Institute named after NE Zhukovsky”) in broad cooperation of domestic enterprises. Thus, an innovative electric motor was created by the SuperOx company by order of the Advanced Research Fund. Among the participants in the work – FSUE “SibNIA named after S.A. Chaplygin” (SibNIA, also part of the Research Center “Institute named after N.E. Zhukovsky”), Ufa State Aviation Technical University, Moscow Institute of Physics and Technology, Moscow Aviation Institute ( National Research University). The customer of the research work “Electrolet SU-2020” is the Ministry of Industry and Trade of the Russian Federation.

– At MAKS-2019, we presented a model of this flying laboratory and individual elements of the power plant. And at MAKS-2021, it has already taken off into the sky. During these two years, CIAM and our project partners have gained valuable practical experience in the development of hybrid power plants and the use of superconductivity in electric motors. We are already using the gained experience in other projects, including the use of hydrogen as a fuel, – said Mikhail Gordin, General Director of CIAM.

“We create superconducting materials and technologies that are needed to create efficient electric aircraft. During MAKS, we, together with our colleagues, clearly demonstrated a very important step on this path – a flying laboratory with a superconducting electric motor made its first demonstration flight. In the future, superconductors in combination with hydrogen fuel will open up a real way to create efficient and environmentally friendly aviation, ”says Andrey Vavilov, Chairman of the SuperOx Board of Directors.

– In flight tests, the most difficult task was to determine the effect of blowing the propeller of an electric motor on the operation of the propulsion engines in flight and the features in case of its failure, which was verified during flights, as well as to determine the features of the longitudinal stability of the aircraft during rebalancing arising. Everything turned out to be within acceptable limits, – says the general director of SibNIA, honored test pilot of the Russian Federation Vladimir Barsuk.

All developers of aviation technology in the world are engaged in the study of low-noise and environmentally friendly GSUs, primarily for promising production aircraft of small and regional aviation. Their advantage lies in the ability, on the one hand, to benefit from energy efficient, environmentally friendly electrical technologies, and on the other hand, to maintain an acceptable weight efficiency by optimizing the design and operating modes of gas turbine or piston aircraft engines.

– The technologies that we use in our “electric plane” are a breakthrough for the global aircraft industry. So far, we are testing innovative electric motors at the flying laboratory, but by about 2030, the Zhukovsky Institute expects to present a number of aircraft with fundamentally different economic and environmental indicators, including noise and emissions. This technological breakthrough could not have been made without the active interest and funding of the Ministry of Industry and Trade of Russia and the Foundation for Advanced Research, ”sums up Andrei Dutov, Director General of the N.Ye. Zhukovsky Institute.