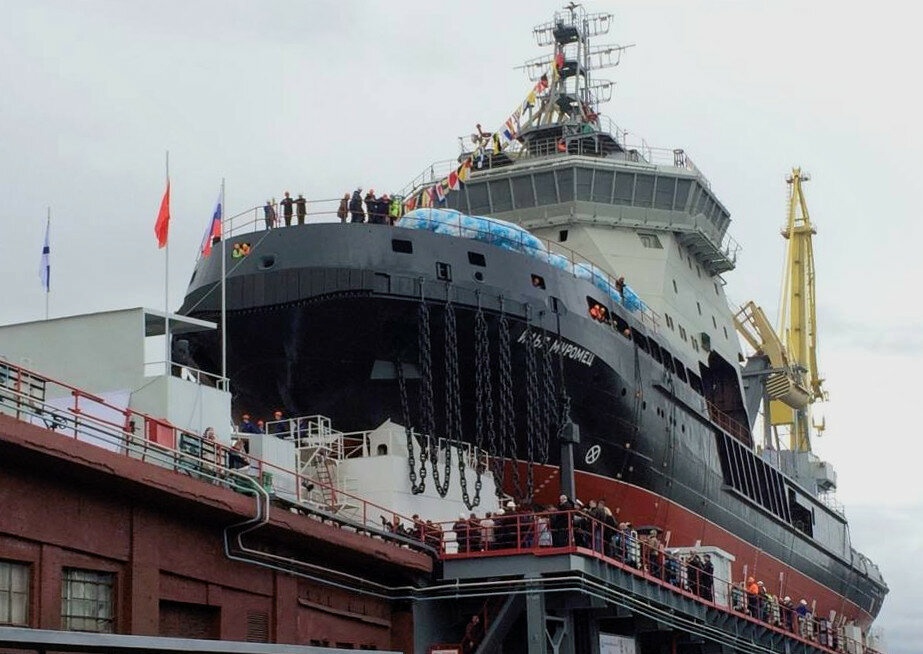 Often, when referring to the Northern Sea Route (NSR), one can hear the definition that this is the “Russian way to India.” Indeed, the NSR is the shortest and safest access to the powerful, developing market of this vast country.

No pipe, even the widest in diameter, can meet India’s oil and gas needs. But shipping by sea is a different matter. It seems that India has been eyeing alternative routes for a long time to ensure its energy security. For Russian gas and oil companies, a partner such as India will help diversify the markets for minerals.

The development of the Arctic for New Delhi is also a matter of constant competition with another global player in the region. With China, which has already laid the foundation for the third icebreaker in the “Snow Dragons” series. India is trying to keep up. It is known that she has been eyeing the Russian project 21180 (M) icebreakers for a long time. These auxiliary diesel-electric icebreakers of a new type with a powerful energy complex and a modern propeller electric installation of Russian production are assessed by the Indians as ships with enhanced functionality. They are able to mill ice up to 1.5 meters.

In terms of displacement, they correspond to the Norwegian patrol icebreaker Svalbard. However, the practice of military-technical cooperation between India and Russia shows that New Delhi trusts more Russian developers and shipbuilders. That is more than once expressed in mutually beneficial and long-term contracts. The project 21180 icebreaker “Ilya Muromets” became the first icebreaker in 45 years, created exclusively for the needs of the Russian Navy. It is part of the Northern Fleet.

Proven partnership over the years

The reincarnation of the aircraft-carrying cruiser Admiral Gorshkov took place in Severodvinsk. With the active participation of the Nevsky Design Bureau, thanks to India. Russian shipbuilders have gained unique experience in the implementation of such global tasks. The Indian order made it possible to actually upgrade the Russian MiG-29K carrier-based fighter to the 4 ++ level.

Today MIG-29K meets all modern requirements for carrier-based aircraft. It is unobtrusive – 20% of the aircraft are assembled from non-metallic composite materials. To reduce visibility in the infrared range, the “cooled wing” technology has been implemented.

The fighter is equipped with the latest avionics, infrared target finder, guidance of close air-to-air missiles by turning the pilot’s head. The new radar “Zhuk-ME”, installed on board, finds targets at a distance of 200 km. With its help, guidance is carried out with corrected bombs and medium-range missiles.

Although the MiG-29K has a shorter range and payload than the Su-33, it is more compact. Thanks to the money of the Indians, is deeply modernized relative to the original Soviet projects MiG-29K and Su-33.

Military cooperation is being transformed into the Arctic Cooperation between Moscow and New Delhi. It continues not only in the military, but also in the oil and gas sector. This may allow India to become the first non-Arctic state to extract resources in the Arctic.

Improving the delivery of Russian energy resources to Indian partners is also a priority. China is very jealous of India’s admission to the region. At the same time, the economic potentials of India and China differ.

China, in addition to having ice-class ships, has long been active in investing in infrastructure energy projects in the Arctic. India in this sense lags far behind. And it’s not just New Delhi’s caution. There are players who constantly distract India from projects that are profitable for it.

India has a clearly positive image in the Arctic G8. In addition, India has lobbying opportunities for a representative diaspora in the Arctic countries. Especially in the United States and Canada. Weak investment activity of Indian business structures is a profitable business.

India has long surpassed Japan and has become the third largest economy in the world, calculated in purchasing power parity terms. The consumption of hydrocarbons is growing every year.

According to the forecasts of the International Energy Agency, India will become the third country in the world in terms of energy consumption by 2030. Due to the lack of its own sources of primary energy, the country will increase their imports. And she is going to do this, taking the most active part in the development of polar resources. In any case, there is such a desire.

In this sense, Russia for India is a guarantee of colossal investments. The only problem is the inconsistency of the concepts of the development of the civil and military navy. It’s like chasing two birds with one stone. On the one hand, India does not want to lag behind China in the Arctic. But on the other hand, it is implementing an ambitious maritime strategy. The goal of which is to turn the country into the main power in the Indian Ocean.

Does India have enough finance, especially considering that the United States is increasingly engaging India in a clash with China through a four-sided military bloc, the so-called Quadrilateral Security Dialogue (QSD), which also includes Japan and Australia. Will India have time for the Arctic if it is drawn into the war?

The US is indeed purposefully luring India into a trap from which the Asian giant simply cannot emerge victorious. Indeed, Pakistan will take the side of China in the event of an escalation of the regional conflict. And a conflict between nuclear-weapon states can easily escalate into a nuclear catastrophe. This is already fraught with stability on the planet, but do such little things worry the hawks in Washington …

The development of the Arctic by India is postponed every time the word “Aksaychin” appears on the world agenda. A region of confrontation between India and China. Two powers that more than others can influence the radical redistribution of world resources. Can the United States allow such “gluttonous” countries, in the opinion of the Yankees, to approach the division of Arctic resources? The question is rhetorical.

The United States can say whatever it wants in the Congress, but the Americans will not allow the strengthening of the influence of China and the supposedly allied India in the Arctic. Their true desire is for India and China to moderate their ambitions. For this, Washington is making every effort to play off Beijing and New Delhi in a senseless duel. That is obviously disadvantageous for both countries.