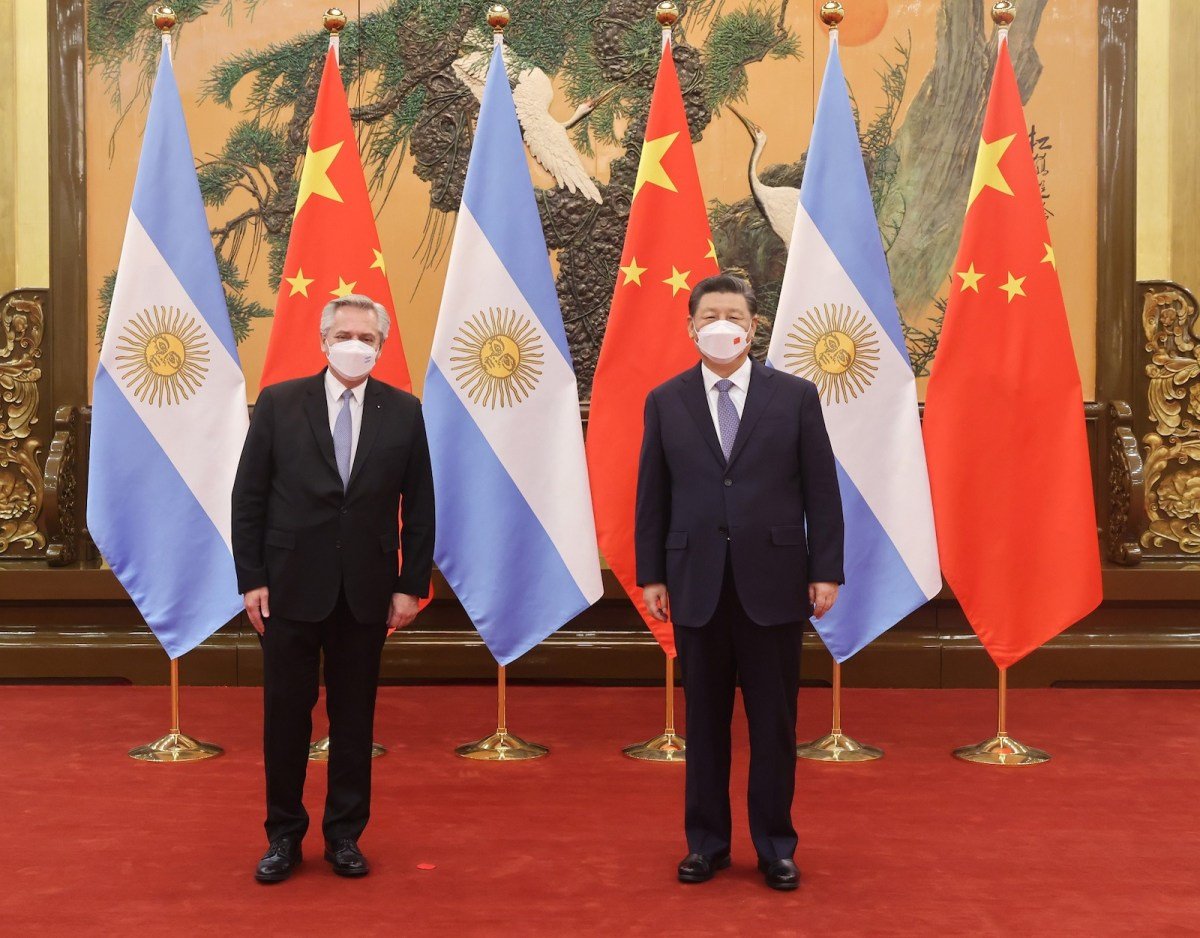 Argentina becomes the 20th of 33 countries in Latin America and the Caribbean to sign up for the Belt & Road. An official seal on what was already an extensive and growing economic relationship.

In addition to expanding trade and investment opportunities with China, joining the Belt & Road should make it easier for Argentina to obtain funding from the China-led Asian Infrastructure Investment Bank (AIIB) and the BRICS New Development Bank.

And this should reduce its dependence on the International Monetary Fund (IMF), a top priority for Fernandez.

Prior to the February 6 meeting in Beijing, Fernandez dropped by Moscow. There he told Russian President Vladimir Putin: “I am determined that Argentina has to stop being dependent on the Fund and the United States. Here I believe that Russia has an important place.”

Coming in the midst of the Ukraine crisis, this was the first of two diplomatic slaps in the face of the US government, which is boycotting the games in Beijing. Fernandez attended the opening ceremony.

The UK had a slap of its own when China took the opportunity to support Argentina’s position on the Falkland Islands (Islas Malvinas). That is another story. It does underline the Global South versus Imperial North nature of the dispute.

This year marks the 50th anniversary of the establishment of diplomatic relations between Argentina and China. More recently, relations between the two countries have advanced considerably during and after the presidency of leftist Cristina Fernandez de Kirchner, who led Argentina from 2007 to 2015.

Difficult relations with the US

She had difficult relations with the US, which she blamed for Argentina’s sovereign debt default in 2014, and she put relations with China on the course they are on today, as is demonstrated by this statement from the Chinese Ministry of Foreign Affairs:

Cristina said that the Chinese government promotes reforms with keen determination, and the whole country is dedicated to the national construction with concerted efforts, by which China has scored great achievements well-known worldwide and become a model for developing countries. The Argentinian side highly values Argentina-China strategic partnership, and is willing to strongly boost political mutual trust between the two countries and to deepen cooperation in economy, trade, infrastructure, agriculture, hydroelectricity, scien-tech and other fields, so as to promote Argentina-China relations for greater development.

Wang Yi said that … China views China-Argentina relations from a strategic and long-term perspective, and stands ready to work with Argentina in maintaining high-level exchanges and deepening strategic communication.

Argentina has the reputation of being an economic basket case, but it has a fairly sophisticated economy and now runs a trade surplus, with exports exceeding imports by 23% in 2021.

Significant trade is already in place

Argentina is a major exporter of soybeans and soybean-derived products, corn and beef, competing with the United States in China and other markets. Like Brazil, it offers China an alternative to dependence on the US in the middle of a long-term trade dispute and increasingly acrimonious rivalry.

Also in January, China’s Zijin Mining announced it had completed the purchase of Neo Lithium of Canada and its 3Q lithium brine project in Argentina. According to the press release, the project “is one of the largest and highest-grade projects of its kind in the world. The property is the fifth-largest lithium brine project in the world, and ranks among the top three in terms of grades.”

The Canadian government approved the deal without a security review and “the project has been approved by the Environmental and Mining Authority in Catamarca Province, Argentina.”

Was the Biden administration notified and, if it was, why did it green-light this acquisition? And if it wasn’t, why wasn’t it in accordance with the agreement [the Canada-US Joint Action Plan on Critical Minerals]? Obviously, we’re NATO allies. We, I think, have a common view of the Chinese Communist Party as an increasingly dangerous and threatening adversary.

5G rollout with Huawei and Nokia

In addition to that, Telecom Argentina began to roll out 5G telecom services last year in partnership with Huawei and Nokia.

The Americans didn’t like that either. But what more attractive alternative to any Chinese project in Argentina have they offered?

On the other hand, the United States is closely identified with the IMF, which is not popular in Argentina. Here’s how Fernandez explained it to Putin:

Argentina has experienced a very special situation as a result of its indebtedness and the economic situation that I inherited. From the 1990s onwards [actually since the Latin American debt crisis of 1982], Argentina has looked to the United States, and the Argentine economy depends a great deal on the IMF debt and the US influence in the Fund …  In 2015 we had a government that once again turned its gaze to the United States and generated the tremendous debt we have.

Not a word about financial irresponsibility

Not a word about financial irresponsibility and the workings of Argentine democracy, but that is not the point.

The final sentence of Fernandez’s comment refers to Mauricio Macri, the center-right businessman and politician who succeeded Cristina Fernandez de Kirchner in the presidency in 2015 and served until 2019.

Macri repaired relations with the US and liberalized the economy. And when a severe drought crippled the agricultural sector, inflation ran out of control and the government could not meet its obligations, he turned to the IMF.

That led to an even worse disaster.

On December 22, 2021, the IMF published the following press release and staff report: Argentina: Ex-Post Evaluation of Exceptional Access Under the 2018 Stand-By Arrangement. Its summary:

On June 20, 2018, the Executive Board approved the largest stand-by arrangement in the Fund’s history, in support of Argentina’s 2018-21 economic program. After an augmentation in October 2018, access under the arrangement amounted to US$57 billion … The program saw only four of the planned twelve reviews completed, and did not fulfil the objectives of restoring confidence in fiscal and external viability while fostering economic growth. The arrangement was canceled on July 24, 2020.

In an economic crisis, countries often need financing to help them overcome their balance of payments problems. Since its creation in June 1952, the IMF’s Stand-By Arrangement (SBA) has been the workhorse lending instrument for emerging and advanced market countries.

Unfortunately, the stand-by arrangement required fiscal and monetary austerity, which caused a recession. Argentina’s GDP dropped by 2.6% in 2018 and by another 2.1% in 2019. Then, with the onset of the pandemic, it plummeted 9.9% in 2020. Poverty increased by an estimated 50% and capital flowed out of the country.

In this situation, Fernandez headed to Moscow and Beijing to broaden his options, stirring up opposition to his leadership on the right as well.

But default has been averted, the IMF has abandoned “tough love” for what could be called constructive sympathy, and currency swaps between the Argentine and Chinese central banks have added to Argentina’s foreign currency reserves.

This should stabilize the economic situation and allow the Chinese to continue expanding their role in Argentina’s economy. They are not wasting any time.

On January 19, agreements aimed at upgrading Argentina’s railway system were signed by the Minister of Transport, the president of the national railway company and representatives of engineering contractor China Railway International Group and rolling stock maker CRRC Qindao Sifang.

Kind nuclear neighbor: What is known about the new project of Putin and Xi Jinping